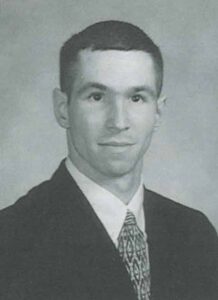 “A lot of what I did at Lafayette is reflected in the life I’m living,” says Bill Yinger ’99. In college, the track and field standout was a four-year varsity letter winner, captain, and recipient of the All-Patriot League honor in nearly every season that he competed. He still holds the record in the pentathlon and decathlon at Lafayette.

Since then, he’s spent the majority of his career at The Hill School, in Pottstown, Pa., where he’s been employed for 22 years as an instructor of science. (Yinger, who grew up in central Pennsylvania, is also an alumnus of the preparatory boarding school.) In addition to having run the school’s science department for a decade, he currently serves as the director of sustainability on campus. During this time, the former student-athlete continued to be committed to track: Yinger has been the head coach for The Hill’s indoor and outdoor programs since 2002. He credits Julio Piazza, Lafayette’s longtime track and field coach, for showing him how to build a program that feels like family; Yinger tries to model his own teams after the ones that Piazza created on College Hill.

Yinger knew, about halfway through his time at Lafayette, that he wanted to work in academia—and, specifically, at a prep school, which would require experience managing dormitories. So he signed up to be an RA at McKeen Hall in his third and fourth years, even becoming the head RA as a senior. “That experience proved integral to my future role as ‘dorm parent,’” he says, explaining that he still oversees residential life for students. (At The Hill, he lives on campus with his wife, Virginia, and their two young sons.)

Under the guidance of his college adviser and biology professor, the late Wayne Leibel, Yinger decided to earn a dual degree at Lafayette—he was already working toward a biology degree, but was encouraged to major in English as well. Having a science background was important, suggested Leibel, but so was being able to communicate what you know. “All of that advice came to fruition when I was a teacher,” Yinger says. “It was invaluable.” He also fondly remembers associate professor emeritus of English Bryan Washington, who passed away in 2015, for instilling in him an expectation of excellence. These mentors indelibly live on through Yinger’s work: He says he takes a piece of each of them into the classroom.

While considering his estate planning, Yinger was so moved from his experience at Lafayette that he wanted to leave a legacy for his alma mater. By naming the College as a beneficiary of his retirement fund, he’ll be able to support the school—and its future students—in a significant way. “To be able to give back to Lafayette after my life is making a gift that, to me, is transformative in nature,” Yinger says. “This aspect of my life will live on.” He notes that the process for adding a beneficiary, which was completed on the computer and via a couple of forms, was relatively easy; what’s more, the percentage, or amount of money allocated, can always be adjusted.

Yinger has been an active supporter of Lafayette through recurring gifts that benefit the track program and financial aid office, plus other initiatives like contributing to the Metzgar Fields Athletics Complex. But this kind of sizable support—naming the school as a beneficiary—is uniquely meaningful because the philanthropic intentions aren’t fully realized until after one’s lifetime. “It says, and recognizes, that you’re going to ‘plant a tree’ that you know you’re never going to sit under,” Yinger says. “I think that’s really powerful.”