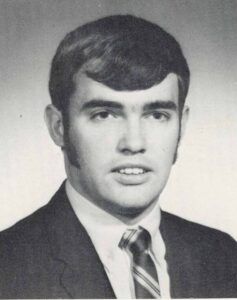 When Don Davis ’71 speaks fondly about his alma mater, one thing is certain—he ALWAYS wanted to attend Lafayette College. His family connection began through his older brother, Bill, who also attended Lafayette, and who also was an engineer. Bill, who graduated six years earlier, actually taught at Lafayette during Davis’ first year. Davis credits Lafayette with preparing him to succeed in an interesting career that spanned working as a postal inspector as part of the national task force that captured the Unabomber in 1996 to head of security for VISA.

That preparation paid off for Davis when he was interviewing for the postal inspector position. During the interview, Davis asked why they weren’t looking for law enforcement personnel. The response was that college students who had a scientific and engineering background at an undergraduate school make better detectives because they use the scientific method and think logically. “Lafayette provided an education that prepared me to think logically, sit back and look at the big picture,” Davis explains.

Davis has fond memories of his time at Lafayette and keeps in touch with some of his classmates and Kappa Sigma fraternity brothers. He credits his Lafayette background for his willingness to accept new challenges, and has great memories of many of his professors, including Leon J. McGeady, Charles A. Dana Professor Emeritus of Metallurgical Engineering and former director of engineering. Davis enjoyed hosting Lafayette student externs over the years and speaking with them about the College, their experiences, and their ambitions. He recommends to them and all Lafayette students that they should be open to experimentation, change, and trying new things in their careers.

When Davis received a planned giving email from  Joe Samaritano ’91, Lafayette’s director of planned giving, the choice was easy for him. He was in the position to give back because of stock options he held when VISA went public. Davis found the process to be seamless, and in 2020, he established his first charitable gift annuity with the College, the remainder of which will establish the Donald J. ’71 and Mary E. Davis Scholarship Fund. Davis recently established his second charitable gift annuity, the remainder of which will establish the William S. ’65 and Catherine A. Davis Scholarship Fund in honor of his brother, who passed away in 2010.