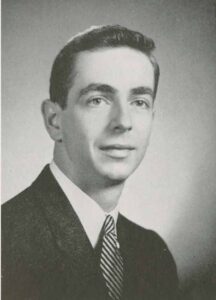 Richard “Dick” H. Garnett ’56 was so moved from his time at Lafayette that he decided to create the Garnett Brothers Engineering Endowed Scholarship Fund in 2021. And then he showed support, again, by repeating the endowment in 2022. The gifts, which were established through a qualified charitable distribution from his IRA, provides financial aid for students who are studying engineering. What’s more, the named scholarship honors the late Albert C. Garnett ’51, Dick’s older brother, as both of them majored in civil engineering. Says Dick: “The intent is to give back to the college that provided the strong educational foundation for the careers of both my brother and myself.”

After graduating from Lafayette, Dick served for two years as an ensign in the United States Coast and Geodetic Survey. During that time, he surveyed coastal areas around Cape Cod, Nantucket Island, Narragansett Bay, New York Harbor, and along the East Coast. (That service satisfied his draft obligation.) Shortly after his discharge, he married Suzanne Wilcox and joined Shell Oil Company, which was the beginning of his 39-year career there.

At Shell, Dick started in construction before moving into sales and, later, business management and senior management. He traveled extensively—even living in London for three years—and had worldwide responsibilities. Meanwhile, Al was employed by Mobil Oil Company and, like his brother, worked around the globe including spending a period exploring Venezuelan jungles in search of crude oil. Al’s career in engineering continued with service in the Army Corps of Engineers and, later, working for the U.S. Department of Transportation.

There were two benefits to funding this endowed scholarship. First, it fulfills Dick’s wish to acknowledge the college that he and his brother appreciated. Another benefit of the planned giving was from a financial standpoint—this kind of qualified charitable distribution is helping to reduce taxable income and lower taxes. In addition to being a gesture of gratitude to Lafayette, one that’s in the memory of his brother, he is also receiving tax advantages from the qualified distribution.

Garnett knows, from personal experience, how extra funding can turn into a pivotal moment for a student: After high school, he was planning on attending Dartmouth College before being offered substantial financial aid through Lafayette’s Class of 1956 journalism work scholarship program. “I realized it was an opportunity I couldn’t give up,” he recalls. “And I’m very happy with the way it worked out for me.” In exchange for tuition help, he was responsible for putting together the annual college bulletin, which listed all of the courses, as well as other publications. (Journalism was something he was familiar with since he had previously served as the editor of his high school paper in Boonton, N.J.) By his fourth and final year at Lafayette, he was receiving full tuition for his work.

“One of the benefits of Lafayette was having an engineering education in a liberal arts environment. It wasn’t just a technical education—it was much more than that,” says Dick, explaining that he welcomed the chance to take electives in other disciplines, like history, and participate in organizations like the Society of Civil Engineers and Theta Delta Chi. As a result of this well-rounded experience in college, he says, he continued to have a broad interest in things like reading and politics throughout his life.

There are no restrictions on the Garnett Brothers Endowed Scholarship and its recipients will be selected by a committee at Lafayette. “I hope the scholarship opens up some opportunities for someone who needs the financial support to give them a little boost to move forward in their life,” says Garnett. “Certainly, I hope scholarship recipients get the same strong educational foundation that both my brother and I received from Lafayette.”