From College Hill to the National Archives 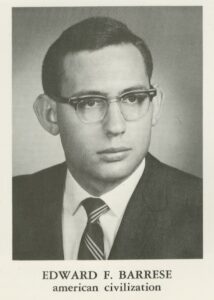 In 1965, young Edward Barrese ’69 was working at Joseph’s Clothier, a men’s and boys’ clothing store in downtown Easton. While many of his friends were considering other colleges and universities, the Easton High School senior was only interested in one—Lafayette College. Barrese’s interest in Lafayette actually began six years before he attended. As he explains:

“In 1959, I was in the sixth grade attending an elementary school in Easton. That December, my sister took me to a vesper service held in Colton Chapel where the all-male Lafayette chorus performed a number of holiday carols. Although I was a native Eastonian, I had never visited the campus except to attend the Easton-Phillipsburg football game on Thanksgiving Day. Upon leaving the chapel, my sister and I noticed that my sixth grade teacher was also in attendance. After we exchanged greetings, she suggested that one day I might be fortunate enough to attend Lafayette. In 1965, I began classes.

“The vesper service in 1959 marked the beginning of my interest in Lafayette. The winter evening was clear and brisk, and the music was extraordinarily beautiful. For the 12-year-old son of a beer truck driver, the campus appeared quite magical. Given my family’s blue collar background, the thought of attending Lafayette seemed unlikely. When the time came to apply for admission to college, I decided on applying only to Lafayette under the early decision program.”

Barrese considers himself a “provincial sort of guy,” and when it came time to choose a college, he preferred to stay close to home. Lafayette became an even better match for Barrese since at the time there was a housing shortage and applicants were encouraged to commute. Barrese applied early decision and was accepted. But most importantly, he was granted a generous scholarship as well as a National Defense Education loan.

“I am grateful to Lafayette because I’ve always felt they took a chance on me,” explains Barrese, who subsequently served 10 months in Vietnam and 35 years in civil service after graduating. “They weren’t stretching the rules to let me, as I did well on my SATs and was 20th in my class. However, I still felt that the College was generous in their scholarships, which I really appreciated because I was making like 80 cents an hour!”

Barrese worked nights and weekends while he was in high school and was able to save for the remainder of the tuition himself. In addition, he was able to repay the National Defense loan during his time in the military. 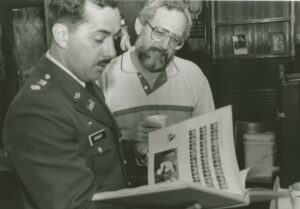 Ed Barrese ’69 (right) looks at a yearbook with Elray Grommoff during a visit to campus in 1990.

Barrese majored in American civilization while at Lafayette and was a member of the ROTC. He fondly remembers several professors including Joseph Dowling, who was actually from Lehigh but served as a visiting professor in American history.

After graduating, Barrese joined the Army and was a member of the Signal Corps, serving two years in Vietnam until he was accepted to George Washington University for graduate studies. Luckily, his unit commander knew that he was accepted and let him leave a few months early to begin his studies. His 35-year career included many government agency positions including the National Archives, Government Accountability Office, National Labor Relations Board, Resolution Trust Corp. (a short-term agency established by Congress during the savings and loan crisis), and the FDIC. But it’s no surprise that this history major’s favorite position was the 11 years that he served in the National Archives.

“I worked in the appraisal unit, which was responsible for identifying historic records in federal agencies. And it was the neatest thing. For example, there were 10,000 glass plate negatives documenting the construction of the Panama Canal that existed down in Panama that I did not want to be destroyed. Although the Library of Congress was interested in the negatives, I ultimately worked with the National Archives to acquire them.”

While raising a family and navigating his busy career in the D.C. area, Barrese still found time to make it back to visit Easton and Lafayette with his family throughout the years. Although there may be physical distance between Lafayette and Barrese, the positive impact of his four years has never left. As a result, Barrese decided to name Lafayette in his estate plans.

“It all comes back to Lafayette taking a chance on me,” says Barrese. “I received two enduring gifts at Lafayette: the ability to think critically and a lifelong deep interest in the history of the American experience.  While these may have come to me at another college or university, I will always be thankful for the vesper service in the winter of 1959 that led me to attend that college on the hill in my hometown.”

Thinking of including Lafayette in your estate plans? It is much easier than you think. For additional information, contact Joe Samaritano ’91, director of gift planning, at 610-330-5047 or samaritj@lafayette.edu.