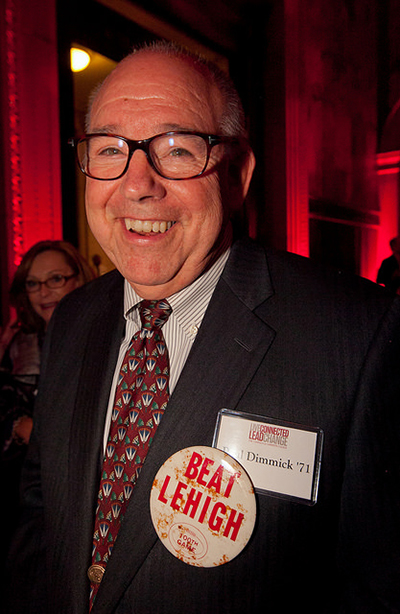 Paul Dimmick ’71 has no shortage of connections to Lafayette College. His father, Byron, earned a degree from Lafayette in chemistry in 1933. Paul’s brother, Gary ’73, graduated with a degree in metallurgical engineering, and his son, Peter ’08, majored in religion and politics. Paul earned his degree in economics and business the first year Lafayette transitioned to co-ed. “Women began attending during my senior year,” explains Dimmick. “It was a memorable time at the College. Now, I have a daughter-in-law, Jessica ’07, who earned a Lafayette degree in civil engineering. It has come full circle.”

So when it came time for Paul and his wife Susan to think about adjusting their financial portfolio, it wasn’t a stretch for them to consider Lafayette in their estate plans. In fact, the Dimmicks previously supported a chemistry lab named in honor of Paul’s father in Hugel Science Center, and Paul has served as a class fund agent for more than 30 years. “In this role, you spend a lot of time speaking with fellow alumni about supporting the College, explains Dimmick. “As a result, I became aware of charitable gift annuities (CGAs) and what they offer. It fit our situation perfectly. I had a concentrated stock position that had large gains and I was looking to diminish my exposure to the stock market and transition to fixed income. With CGAs, you receive an immediate charitable contribution and annuity payments every month.” Dimmick explains that financial planning is an individual decision and it is difficult to make assumptions about what is best for everyone, but for his family it was the right decision.

With many fond memories of his four years on College Hill including his time as managing editor of the Lafayette, participating in ROTC freshman year, and joining Sigma Nu fraternity, Dimmick’s long standing connection to the College remains strong. “When you get to my stage in life and think back to your college days, there is so much that comes to mind,” says Dimmick. “But my most vivid memories involve individual classmates.”