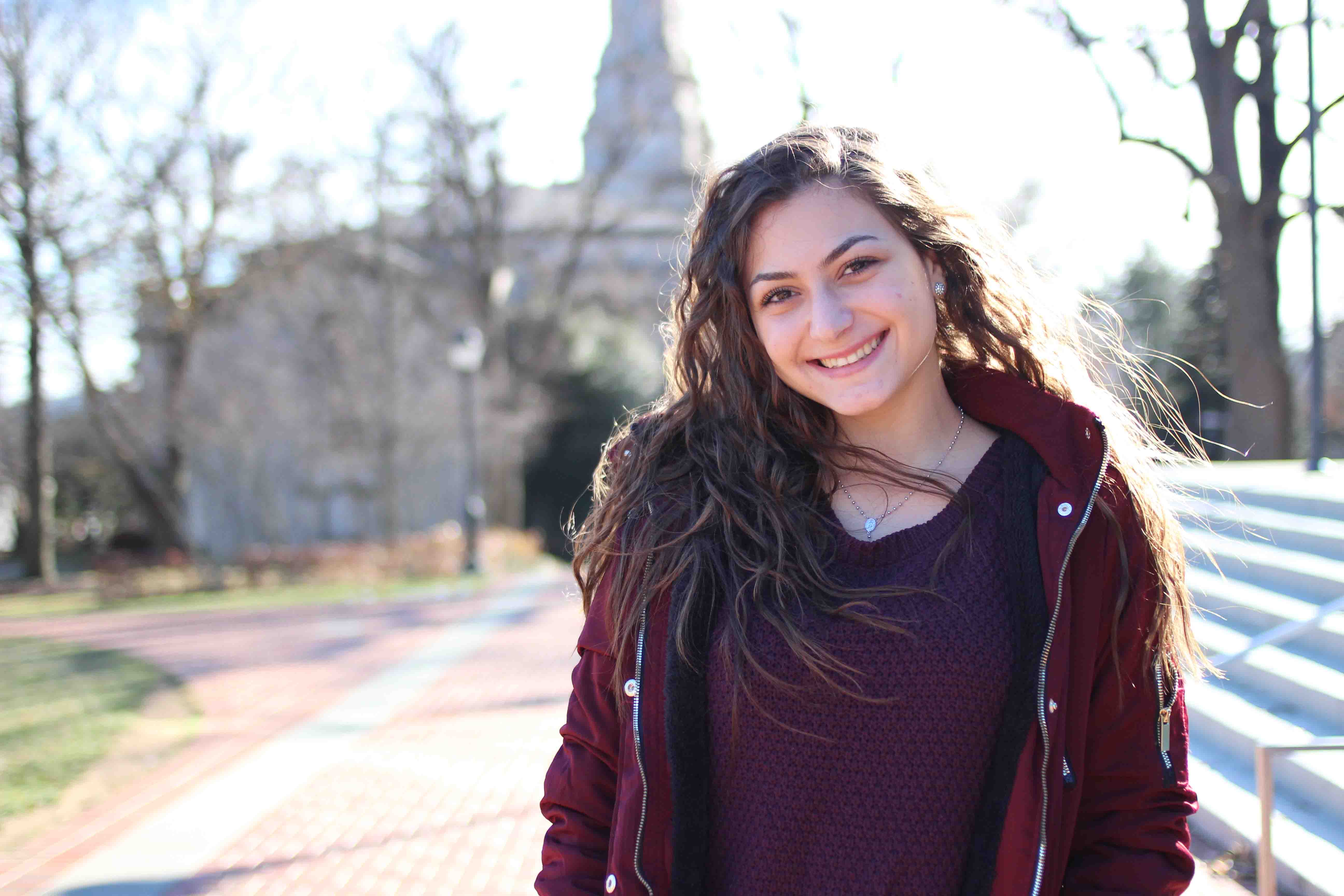 If you live in the Lehigh Valley, you may pass a Chevy Impala shuttling down Route 22 during the morning rush-hour commute. Inside is Jessica Ammous ’21, a commuter student from Whitehall Township, a suburb of Allentown.

She considers the valley her second home. Her first is Syria. Commuters around her may hear news of Syria on their morning drives that conjure images of street fighting, destroyed cities, and ruined lives.

While the five-year civil war has come to an end and Aleppo has been the scene of tremendous devastation, Ammous recalls only beauty.

Not that she didn’t experience the loss. She was at a Girl Scout meeting in her church basement when a mini-bomb shattered windows on the first floor.

“We were used to it,” she says. “So we didn’t go home after the bomb exploded. The meeting continued.”

This resilience was a characteristic she drew on when her family moved back here in 2014. Ammous was born in the U.S. but returned to Syria as a 2-month-old.

So she began her sophomore year in high school, longing for the language, food, traditions, and culture of her homeland.

“I was quiet that year of school,” she says. “I didn’t have the courage to speak, scared of how my accent might sound. But my English was good enough that I didn’t have to take English as a Second Language courses. Instead I was placed in regular classes.”

In the quiet, she “worked on herself,” reading books, practicing her English, and studying hard.

When the time came to look at colleges, her parents wanted her to stay local.

It helped that many of her Syrian peers were in similar situations.

“I graduated with 25 other Syrian Americans in my class,” she says. “They are my closest friends, and many also planned to commute to college.”

When she visited Lafayette, she fell in love.

“I walked on campus and knew I had found my home,” she says. “I prayed to be accepted.”

Faith is fundamental in the Ammous home.

“As a Christian, the church has been a central part of my life,” she says. “While it can surprise people here, there are many Christians in Syria.”

At church she was in her youth fellowship and active in community service projects.

Her prayers were answered, but attending Lafayette was only possible with the help of financial aid.

“I am so grateful for what the Lafayette community has given me,” she says. “It motivates me to work even harder.”

She’s not afraid of hard work. Ammous spends her weekends in retail sales, clocking nearly 15 hours. This work ethic was inspired by her parents.

“My dad was an engineer, and my mother taught English in Syria,” she says. “But when we returned to the U.S., the time and energy to transfer those degrees was too great. Our family’s needs made finding work the main priority, so they are not using their diplomas. That sacrifice motivates me.”

She has clear ambitions. Planning to major in biology on a pre-med track, she wants to combine her love of anatomy and science with her desire to see people happy. General medicine attracts her most.

While she is not an on-campus resident, her classes and projects have her feeling involved and connected.

“I am on campus during the day and with people here,” she says. “I am at home with my family at night, and hang out speaking Arabic with my Syrian friends for fun. I feel like I have three homes. Each is in my heart and made me who I am right now.”