As a sophomore at the Lycee Andohalo high school in Madagascar, Donovan Rasamoelison ’19 hoped to gain admission into an American college but needed a helping hand. Students in Lafayette Initiative for Malagasy Education (LIME) provided that by visiting the school to teach strategies for applying to college and doing well on the SAT and the TOEFL English language test.

Rasamoelison paid it forward this January by returning to Lycee Andohalo as one of the dozen members of LIME who mentored students. 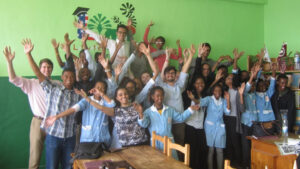 “The importance of the LIME program is that we have five students from the Lycee [at Lafayette], one of whom graduated last year,” says Susan Averett, Dana Professor of Economics and LIME adviser. “It is also a life-altering experience for the Lafayette students who travel to Madagascar. They work side by side with the Malagasy students and that relationship continues after they leave. Thus, it is truly an immersion experience.”

Rasamoelison again received a helping hand, this time in the form of a scholarship that funded his trip, the Morrison Handsaker Study Abroad Endowment Fund established by Leon Wagner ’75. 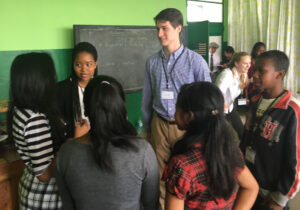 “I am very grateful for the opportunity to give back to my community and, especially, to the LIME students,” he says. “I am also very thankful because the scholarship helped me to be more motivated as I go forward in my academic career.”

Other students who received scholarships for study abroad in 2016-17 include:

Rasamoelison enjoyed sharing his experience with the Malagasy students.

“They were very passionate to know all the things I did before I came to the United States,” he says. “I think I inspired them to work harder and showed them that going to study in the U.S. is a realizable dream.” 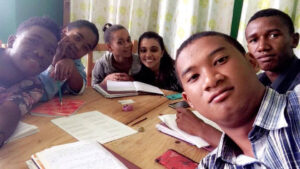 In addition to meeting with Peace Corps volunteers, the LIME mentors met with the Ministry of Education to discuss the educational system in Madagascar and its future development. They also met with the public affairs officer of the U.S. Embassy in Madagascar to discuss the U.S. work there to fight corruption, promote democracy, and apply different development assistance through USAID.

“I learned a lot from this experience,” Rasamoelison says. “First, it has made me a better person. Even though I was myself a student before, I still learned a lot from the students I worked with. They made me realize again that I have a big advantage in having an American education and that I should do my best to get the most out of it.”

Rasamoelison plans to seek a Ph.D. to research economic development in countries like Madagascar.

“Coming from a developing country, I have always had some interest in the idea of fighting poverty and developing an economy,” he says.

Rasamoelison says that LIME is very important not only for the students, but also for Madagascar.

“I think the most important part of what LIME is doing is inspiring the students to use education as a tool to go forward and achieve their life goal,” he says.

Most LIME students who don’t enroll in the U.S. go on to attend a university in Madagascar.

“The students are also participating in different leadership activities and share the knowledge they get from LIME in their respective community,” Rasamoelison adds. “From my point of view, the most important thing is that LIME guarantees a huge return for the country in the long run. I think people contribute more and are more influential to development when they are better educated.”