The ranks of Lafayette’s most honored benefactors grew with the recent induction of six new members into the Société d’Honneur.

The Société was founded by the Board of Trustees to recognize exceptional lifetime generosity on the part of alumni, parents, and friends. Last year marked the 30th anniversary of the induction of the 29 inaugural members on April 4, 1986. Their financial support spanned the first 160 years of the College’s history. The Société has since grown to 126 members, including 29 inducted during the Live Connected, Lead Change campaign. 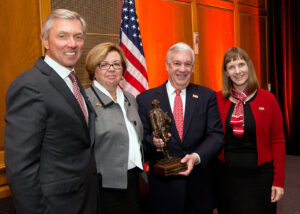 Ed and Cathy Ahart share a passion for education, believing it is critically important to the betterment of our world. Through their support and service, they have positively impacted teaching and learning.

A highly regarded elementary school teacher, Cathy retired in June 2016 from Clinton, N.J., Public Schools. In addition to teaching various grades, she taught an innovative multi-age program, which created individualized instruction for students. Cathy concluded her career as media specialist and librarian, a role in which she managed resources that supported teachers and students and advanced the school’s curriculum and learning enrichment programs.

After earning his juris doctorate from Cornell, Ed joined the law firm of Schenck, Price, Smith & King. A skilled business attorney, Ed was managing partner and chair of the management committee for more than 20 years. In 2010, he was named chairman of the firm. He recently returned to the full-time practice of law and now heads the firm’s corporate and not-for-profit practices.

Ed has served Lafayette in key leadership positions for almost three decades. From 1990 until 1992, he was Alumni Association president. Ed was elected to the Board of Trustees in 1992 and succeeded Alan R. Griffith ’64 as chairman in 2010. In addition to serving as chairman, he chairs the Steering Committee, Executive Committee, and Committee on Compensation and serves on the Campaign Executive Committee and Committee on Trustees and Governance. In gratitude for the transformative impact of his service, Ed was recognized with the Joseph E. Bell ’28 Award for Distinguished Service in 1998 and an honorary degree at Lafayette’s 175th Commencement ceremony.

Throughout Ed’s service to Lafayette, Cathy has been his enthusiastic partner. Together, the Aharts have generously given of their time and treasure to support Lafayette’s most strategic priorities, with a focus on financial aid. 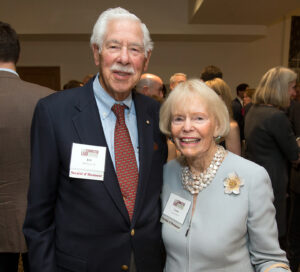 William ’50 and Laura Buck have spent a lifetime advancing causes close to their hearts. Their philanthropy has positively affected many lives and organizations.

On College Hill, Bill grew in his love of the arts, playing alto saxophone and clarinet in a Dixieland band. Active in Zeta Psi fraternity, Bill was recognized with the organization’s Distinguished Service Award in 1988. After graduating, he worked for Smith, Kline, & French for two decades and served for many years on numerous boards, including those for Bryn Mawr Bank and Philadelphia Zoo, which awarded him its highest honor, the Camac Award. In 1977, he joined his brothers in launching TDH Capital, one of the Delaware Valley’s first venture capital firms, which invested in notable enterprises, including ESPN, Airgas, Staples, and Intelligent Electronics. They also formed a limited partnership that holds significant ownership of the Philadelphia Phillies. Instrumental in the creation of Legacy Youth Tennis and Education, Bill was recognized with the Arthur Ashe Award in 1993.

Laura is a board member of the Discovery Center, a joint effort of the Audubon Society and Outward Bound. She also chaired the Philadelphia Antique Show, which benefits University of Pennsylvania Hospital, and has been involved on boards and committees serving organizations, including Agnes Irwin School, Philadelphia Museum of Arts, and Vero Beach Museum. Laura is passing on the family legacy of philanthropy to their daughters as she partners with them to support community organizations through their family foundation.

At Lafayette, the Bucks have made a transformative difference through their generosity. The couple has supported Skillman Library, created music programs, and donated the Buck Squash Courts in Kirby Sports Center. Most recently, they made a major gift to the Live Connected, Lead Change campaign, and the College named its newest building William C. Buck Hall at the Williams Arts Campus. 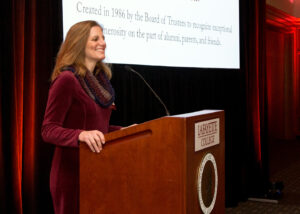 For Marc and Linda Assante Carrasco, their philanthropy is deeply personal. The couple seeks to make a difference for organizations and programs that are closely connected to their passion for addressing social and environmental issues. By doing so, they hope to enrich the lives of others.

Steadfast in their belief in the importance of education, they have supported many educational causes. At Lafayette, the couple created the Global Learning and Community Engagement Fund, which provides opportunities for Lafayette students to take an entrepreneurial approach to applying their studies to serving communities around the globe. As they advance their own learning, grant recipients also have a tangible impact on the lives of others. For example, support from the fund recently enabled Lafayette faculty and students to travel to Honduras to assist in the development of a master plan for sustainable recovery.

Linda is a managing partner of Jasper Ridge Partners and leads the real assets team, which has responsibility for investment strategies in real estate and natural resources. Prior to joining Jasper Ridge Partners in 2008, she was a principal with The Townsend Group and vice president and head of West Coast Real Estate, Lodging, and Gaming Investment Banking at JPMorgan. Linda serves on Lafayette’s Board of Trustees. Previously, she was chair of the West Coast Advisory Council.

Marc earned his undergraduate degree in integrative biology from the University of California, Berkeley, and his doctorate in earth and environmental sciences at Columbia University in affiliation with the American Museum of Natural History. In addition to doing postdoctoral work at Berkeley, he has worked in the university’s Museum of Paleontology and taught geology and biology at various community colleges. As a Mexican-American scientist, Marc is passionate about supporting individuals in science who come from traditionally under-represented groups. 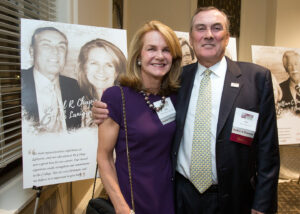 Since attending Lafayette together, Sam and Beth Lanigan Chapin have joined in life and service. The Chapins, who are enjoying successful careers, also use their talents and skills to advance worthy causes.

Beth grew up attending Lafayette football games with her father, Bill Lanigan ’52. Not expecting his daughter to be able to attend his formerly all-male alma mater, it was a pleasure for Bill to watch Beth thrive at the College. Highly regarded, she was nominated for the Pepper Prize. After graduating, Beth applied her knowledge in leadership roles at prestigious advertising firms, including J. Walter Thompson, Grey, and Ogilvy & Mather. She is now using her talents and applying the full spectrum of her Lafayette education in service to Metropolitan Museum of Art and other nonprofit organizations.

Believing their Lafayette experience set them on the course to success, the Chapins share a commitment to creating transformative student experiences, enhancing the College’s campus, and providing financial aid to deserving students. Today, as they are presented the Société d’Honneur statue, which was created under the leadership of Beth’s father, they join him as members of this society that recognizes Lafayette’s most generous donors. 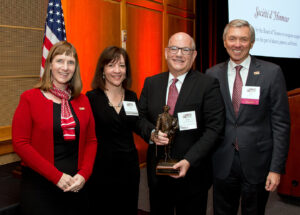 Tony and Sue Fernandez, who met on College Hill, believe their Lafayette education changed their lives and has been a catalyst for their personal and professional success. In gratitude, they now join in service to various organizations as they seek to be agents of change in our society.

When Tony was a child, his parents sacrificed the life they knew in Cuba to immigrate to the United States in order to provide their children with the opportunity and freedom to pursue their dreams. Since earning his chemical engineering degree, Tony has enjoyed a successful career as a supply chain executive at notable companies, including Pinnacle Foods, Kraft Foods, Cadbury, and PepsiCo. Currently president of AFF Advisors, Tony is applying his proven ability to lead complex transformation initiatives and experience in global supply chain strategy development to the advancement of his clients’ businesses.

After earning her degree in biology, Sue applied her technical skills as a research scientist and sales representative at several companies. During the past two decades, she has dedicated herself to education reform and has served in leadership roles at various PTA organizations. Currently, Sue is a religious education teacher and is involved with various ministries at St. Mary Parish in Ridgefield, Conn. In May 2017, she will earn her master’s in theology from Holy Apostles College and Seminary.

Feeling that they owe much to the College, Tony and Sue now dedicate their philanthropy to making it possible for students to have their own Lafayette experience. The couple has generously provided financial aid to deserving minority students interested in engineering and has supported Lafayette’s Engineering Division in advancing multidisciplinary collaboration. Tony serves on various committees and as president of the Class of 1981. For several years, Sue served as correspondent for the Class of 1983. They have also served as alumni admission representatives. 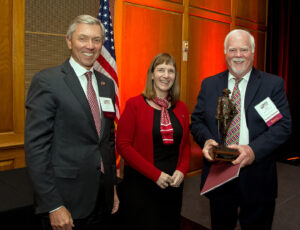 Throughout his career, Kent Rockwell has demonstrated visionary leadership in advancing companies that leverage technology for the betterment of mankind.

Since 1983, Kent has served as chairman and chief executive officer of Rockwell Venture Capital, through which he has operated and invested in many businesses. A highly successful entrepreneur, he has created more than 30 companies with collectively more than 3,000 employees, including Rockwell Forest Products Inc., Strata Products Worldwide, Appalachian Timber Services, Strata Proximity Systems, and ProGrass LLC. Since 2007, Kent has also served as executive chairman of ExOne Company, a global leader in additive manufacturing technology that serves the aerospace, automotive, heavy equipment, and oil and gas industries. Previously, Kent served in leading executive roles of four public companies: Argon ST, Astrotech International Corporation, SenSyTech, and Rockwell International Inc.

Reflecting on his Lafayette experience, Kent celebrates the lifelong friendships that still resound very significantly in his life. Those relationships, which contributed meaningfully to his development, have kept the Lafayette experience alive in his heart and mind. His philanthropy, which has advanced a broad spectrum of Lafayette’s most strategic priorities and pressing needs, included one of the largest gifts in the College’s history, which he dedicated in support of the Integrated Sciences Center.

In 1971, Kent was asked to join Lafayette’s Board of Trustees during an initiative to diversify the board with young leaders and innovators. He fondly remembers that one of the first issues that he was asked to consider was whether to welcome female students at Lafayette, which he describes as a very positive transition for the College. He currently serves on the Trustee Committee on Financial Policy. In addition, Kent has supported the National Lafayette Council, the Leadership Council, and the Alumni Association with his knowledge and wisdom.