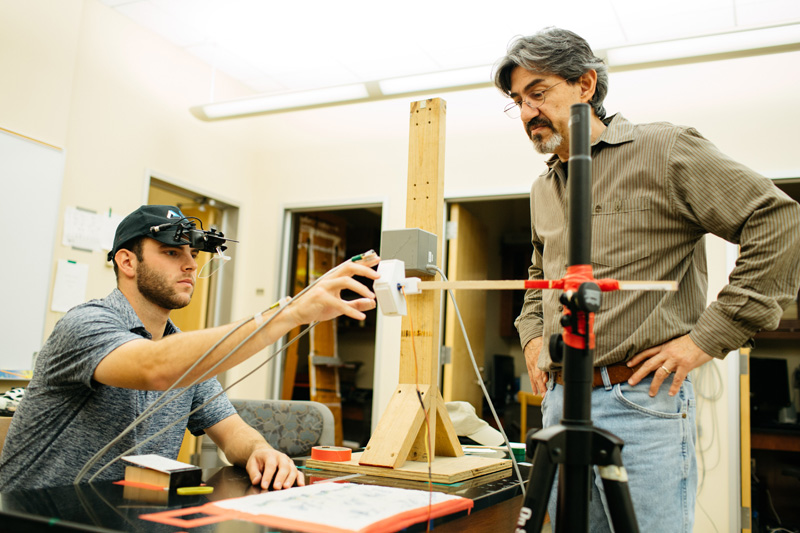 Matthew Barrett ’17 (Hatboro, Pa.) is hoping that research he’s conducted for years at Lafayette will prove valuable to therapists assisting stroke patients in their recovery.

“I have valued my time doing research at Lafayette tremendously,” says Barrett, who is majoring in neuroscience with a minor in bioengineering. “I really enjoyed the material we were learning about, specifically about the brain’s motor pathways. It’s rewarding to know that everything that I learned can be applied in the real world.”

Barrett has been doing the research since the first semester of his sophomore year. He’s worked with Luis Schettino, assistant professor of neuroscience —along with Sally Trout ’16 and Noah Steinberg ’17—to determine the extent to which wrist joint extension and deviation affect hand preshaping during a grasping task.

Several research subjects were tasked with grasping two objects of different shapes in two different orientations that were either flat on a table or in mid-air. The trial accounted for variables like digit placement, wrist rotation, and velocity.

“We used different wooden shapes and a motion-tracking system to track where our subject’s fingers would be placed on the three-dimensional shape,” says Barrett. “Ultimately, we were able to determine specific grasping motions and hand movements based on our data. If someone were to try to grasp a shape, we could determine what the grasping movement would be without even seeing it.”

He points out that this information could eventually be used in therapy applications, for example, to help individuals who suffered a stroke regain mobility.

In 2015, the Lafayette group presented a poster of its work and findings at the Society for Neuroscience’s Annual Meeting in Chicago and at a regional neuroscience conference. 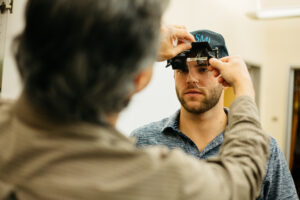 Barrett’s work has spanned independent study, Lafayette’s EXCEL Scholars undergraduate research program, and advanced research. This year, he may add an eye-tracking device to determine how motor coordination is directed by eye gaze.

Outside the lab and classroom, Barrett is the director of service and philanthropy and treasurer for Delta Kappa Epsilon. He also founded and is the president of Lafayette’s club golf team, which was a 2014 Fall National Championship invitee and the 2015 Fall Metro Regional Champion.

Barrett hopes to go on to medical school after graduating from Lafayette and possibly go into neuro-ophthalmology. No matter what, he will continue to conduct research. 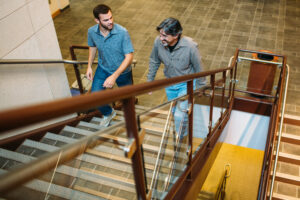 “It’s something I want to keep doing throughout my career, especially if I’m a doctor, because I think it’s the best way to learn,” he says.

Barrett notes that without financial assistance, his amazing opportunities at Lafayette would have been beyond his reach.

“I was very interested in Lafayette because of its neuroscience program, but I had to look at colleges that were affordable for me and my family,” Barrett says. “When I found out that I was getting an endowed scholarship from Lafayette, my decision was made. I am incredibly thankful to Mr. [Boyer] Veitch [’53] and to Lafayette for opening this door for me.”