From Cost Containment to Generous Giving

After making a career of analysis of need and spending, Richard Logan ’50 is very pragmatic about how he makes donations.

“When I consider the organizations that I support, I look at what they are doing for society,” he says. “Lafayette is doing very worthwhile work and striving to be better, and doing so in a systematic—but not an empire-building—way. They have stayed small, which I appreciate, and the focus on academics is really the most important thing to me.” 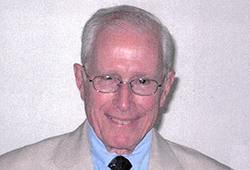 Logan earmarks his giving for the Psychology Department and Skillman Library with the remainder unrestricted. Logan also established a charitable gift annuity (CGA) with Lafayette. The CGA is a gift made to the College that can provide the donor or another annuitant whom he or she designates with a secure source of fixed payments for life along with a tax deduction.

“I wanted to balance things out a little and, because I was going to unload some of my retirement funds, I thought it would be desirable that I derive some income from a part of it,” Logan says. “I feel it’s important to give back. I made a lot of good and long-lasting friendships while I was at Lafayette. I’ve always had a soft spot in my heart for the school, and I see it getting better and better all the time.”

One might say that affection for the College is in Logan’s DNA.

Logan entered Lafayette in the summer of 1945, as World War II was building to a crescendo.

“It was an odd time,” recalls Logan, a psychology graduate who also earned minors in English and philosophy. “At that time, the College had a special program because, among other things, the student body had slipped to alarmingly low levels and it was in poor financial condition.”

The summer program, Logan explains, was implemented to attract potential students to register at Lafayette with the likelihood that they would be called into the Army.

“This way,” he adds, “Lafayette would have students in the backlog when they returned from the war. The war ended while I was in the program that August, so I came back in the fall and finished one year.”

Even though World War II had ended, Logan still got his Army draft notice and stayed out of college in the fall of 1946 in anticipation of shipping out. However, two weeks before he was scheduled to depart, the draft was called off.

“I was left high and dry, so I spent one semester at a school in Cleveland and came back to Lafayette in the fall of 1947,” he says. “I wound up graduating in the middle of the academic year in 1949-50. I finished one semester beyond my initial graduating class, so I wound up in the Class of 1950.”

Logan recalls it being Lafayette’s largest graduating class to that point.

“What was significant was that we had a huge influx of people who spent time in the service come to Lafayette,” Logan recalls. “These returning veterans were a huge influence on all of us. They were so dedicated and committed to getting through their education and getting back out into the world that it lit a fire under all of us.”

That fire stayed lit until Logan received his degree. He then earned a master’s at Columbia University, and shortly after that, he got another draft notice.

“I got my master’s degree in psychology, but I never used it professionally,” Logan says. “After two years in the Army, I felt well removed from what was going on in professional circles.”

Instead, Logan spent approximately nine years in industrial sales and marketing, after which he gravitated to the health care cost-containment field. His service primarily was for a nonprofit agency in Philadelphia called the Health Survey Committee, which had been formed to help business, industry, and foundations determine whether to support hospital projects.

“It was an interesting field that had just gotten underway late in the 1950s,” Logan notes. “This area of cost containment had to do with evaluating hospital construction programs to determine whether or not they were needed. For the most part, it was a variety of market research.”

The Health Survey Committee evaluated what the hospital needs were in an eight-county area that included Philadelphia and parts of New Jersey.

“The approach was to determine how many patient days needed to be covered, allowing for emergencies, seasonal variations, and other factors,” Logan explains. “We then broke that information down in a variety of ways geographically and determined needs for the different parts of our area.”

Over time, more individuals and entities came to depend on the Health Survey Committee’s capabilities and its reach extended beyond hospital beds to determine current volumes and trends associated with individualized, specialized hospital services, such as radiation therapy and open-heart surgery.

“It was valuable information and we had an excellent, professional staff,” Logan says. “But, eventually, the government decided that it would create similar agencies all over the country supported by tax dollars. Since we were a nonprofit that depended on contributed funds primarily from businesses and foundations that relied on our findings, our contributors came to the conclusion that they couldn’t really afford to support two agencies, one with their taxes and the other with their limited dollars to contribute.”

The Health Survey Committee merged with the Chamber of Commerce in Philadelphia. Logan was a consultant for several years until he was appointed to the board of Blue Cross Blue Shield of Delaware, and served as the organization’s vice president for provider relations until his retirement.