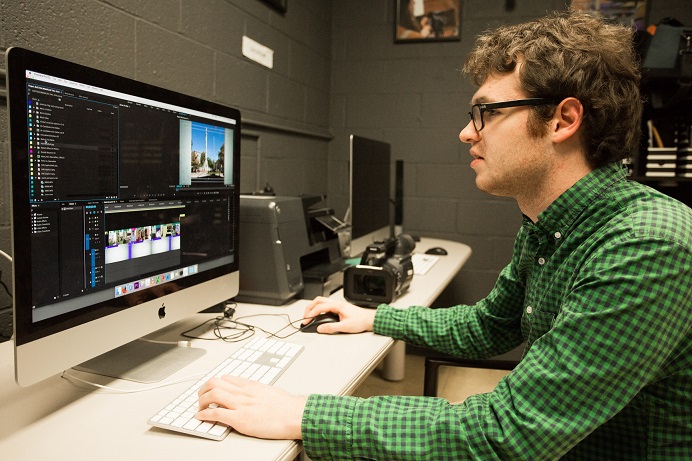 William Gordon ’17 admits that as he was considering colleges, he was not enthusiastic about the idea of attending his father’s alma mater. That changed when he toured Lafayette and heard U.S. Vice President Joe Biden speak.

“I really loved the College when I saw it,” says Gordon, who as a first-year student was excited to hear former President Jimmy Carter give a lecture on campus. 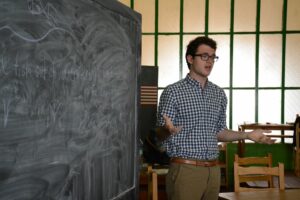 Carter’s visit was funded by the late Robert Pastor ’69 and his wife, Margaret. The generosity of another alumnus makes Gordon’s education possible.

“Without my scholarship, I would not be able to excel at Lafayette and do the extra-curricular activities I love,” he says. “I am thankful to James Cosgrove ’86 for this opportunity.”

A double major in English and government & law, with a minor in economics, Gordon has found a number of ways to combine his interest in communication and political science. For three semesters, he has worked on Lafayette Lens, a series of student-produced, 30-minute broadcasts on contemporary issues, which air on Lehigh Valley PBS affiliate Channel 39 WLVT. Last year, for a program about Latino immigration, he produced a clip to explain its impact on the Lehigh Valley.

“Sixty seconds isn’t long at all to explain how immigrants affect the economy of the Lehigh Valley,” he says. “I learned how to boil things down.” 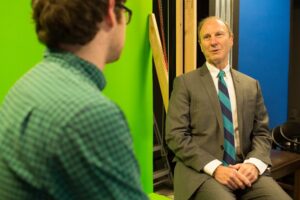 Will Gordon ’17 and Mark Crain, William E. Simon Professor of Political Economy and chair of the Policy Studies Program

The summer before his junior year, he served an internship at the Morning Call newspaper. Gordon, who plays the guitar, wrote about local music for the Arts and Entertainment section.

This past summer he interned for six weeks in Lafayette’s Digital Humanities Summer Scholars Program, which is supported by funding from Skillman Library’s Mellon Grant for Digital Initiatives. Students learn and use digital tools, methodologies, and community practices in order to build a research project of their own design.

Gordon’s project was to examine whether the language of Supreme Court justices differs according to their political ideologies. To do this, he built a “web scraper,” a tool to gather data from the Internet, in the coding language Python, which he taught himself.

He considers his most meaningful experience at Lafayette to be leading The Lafayette as editor in chief, a role he assumed halfway through his sophomore year.

“It’s taught me a lot about hard work, leadership, communication, reporting, and research all wrapped up,” he says. “When I became editor in chief, we were losing our funding. I had to fight hard to get our funding restored and increase our advertising.”

Gordon is particularly proud of breaking the story, along with Ian Morse ’17, on the hunger strike that Professor Juan Rojo began after being denied tenure in August 2016. National news media, including ABC News, The Washington Post, The Seattle Times, The Chronicle of Higher Education, and Inside Higher Ed subsequently picked up the story.

He also is proud of the newspaper’s coverage of a working group’s recommendation to President Alison Byerly that funding for the Posse program in Washington, D.C., be cut in order to offer more financial aid to needy students applying outside the Posse program. (Lafayette draws from two Posse programs; funding for the New York program was recommended to continue.) The recommendation ignited controversy, and in multiple forums members of the Lafayette community aired their responses. The Lafayette covered the issue in a series of articles as the recommendation became public and students responded. The College decided to maintain the D.C. program.

While Gordon might eventually go to law school, next year he plans to apply for a print or web-based journalism job.