Back in 1963, when Michael O’Kane ’67 was considering colleges, he was drawn to Lafayette for its beautiful grounds, its academics, and its location—close enough to hitchhike back to his Princeton, N.J., home (“we did that in those days”), but “too far for my parents to drop by all the time.”

He began on a pre-law track, but that fell through when he couldn’t keep up with the reading. Then he flirted with history (also book heavy) and English (“I hated poetry”) before settling on economics. It was such a good fit that after graduating, he immediately enrolled in Rutgers University’s MBA program, where he continued to learn about stock analysis and trading. 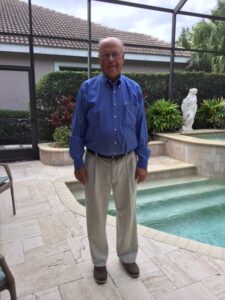 O’Kane’s expected career changed course, however, when he landed his first job at Prudential Insurance. Instead of diving into the stock market, he learned about private-placement bonds, which typically offer higher yields but at greater risk because they’re bought only by a select group of in-the-know investors. Since they’re not public, they don’t have to be registered with the Securities and Exchange Commission, and the offering companies may provide less-than-comprehensive information.

To survive in this market, investors have to know their stuff—not just how to find it (through everything from interviews with company management to tracking newspaper stories), but how to analyze the mountains of data so you’re not jumping off a cliff with a bad project.

After building his financial acumen for seven years at Prudential—and, he admits, his ego—O’Kane moved to Pittsburgh for what he thought was a golden opportunity.

“It was one of the biggest mistakes of my career,” he says. “I decided I could be a chief financial officer for a manufacturing company, and I knew very quickly it wasn’t working. I had been a creditor all my life, and now I was on the other side of the table.”

He left after two years. So without any better opportunities, O’Kane decided to put his back into his next move—literally.

“I knew a guy who was looking to invest in a business,” he explains. “He was the husband of a real estate broker. He read an article in the Wall Street Journal about a Boston company called The Back Store that was doing very well. We discovered that 80% of population have bad backs at one time or another, and there aren’t really a lot of stores that sell furniture, car seats, neck pillows, exercise equipment, and other things like that for people with back trouble.”

Thus, My Aching Back was born.

“We even sold hypnosis tapes,” he says. “The problem was, people with bad backs didn’t want to buy things unless their doctor told them to do it, and also unless Medicaid paid for it. We knew we wouldn’t be able to franchise, so I left.”

His next move was back to New York to work for TIAA-CREF (Teachers Insurance and Annuity Association College Retirement Equities Fund), where he remained for 18 years, eventually retiring in 2004 at just under 59 years old. In his last position there, senior managing director of the Securities Division, he oversaw a portfolio with $120 billion in assets and managed 120 people. He loved the work and found that investors and employees were loyal.

“I used to think it was because of my personality,” he says, “but it was the money.”

A member of Lafayette’s Fleck Consistent Giving Society and the Marquis Society, O’Kane decided to establish a charitable gift annuity because it met a number of objectives. Established under his wife Rita’s name, it offers a reasonable rate of return, provides a stream of income for her (“She’ll live a lot longer than me because she has better DNA,” he says), and allowed an immediate tax deduction. In addition, since he donated appreciated stock, he reduced his capital gains tax.