Living Out Her Dream 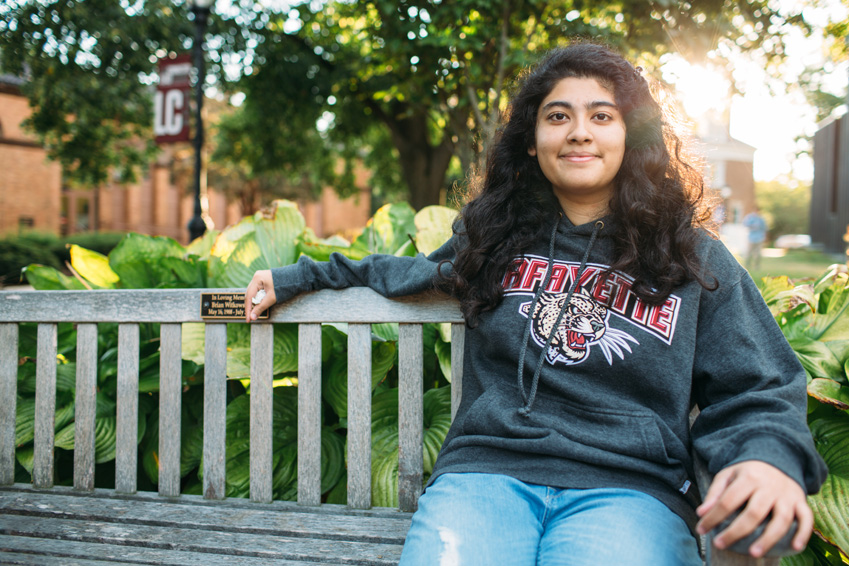 During her childhood in Pakistan, her father instilled in Aleeza Ajmal ’18 a dream of pursuing higher education in the U.S.

“Both of my parents work very hard to make sure that my two brothers and I live a life that they could have never imagined, by escaping societal boundaries and restrictions,” says Ajmal, a native of Islamabad and chemical engineering major.

Many Pakistani parents as not as liberal minded, she says, and don’t want their daughters to study abroad.

“Females are discouraged from pursuing engineering in general,” she adds, “because their parents think that’s a male-dominated field and that their daughters are better off not pursuing a field that requires a lot of time and effort that they can’t handle. If I go back to my own school, I want to share how studying chemical engineering is a great experience. Girls should consider studying engineering because it opens up a whole new world.”

Ajmal planned to major in economics until she took Introduction to Engineering: The Science of Small Things with James Ferri, professor of chemical engineering, in her first year. She was captivated by discussions in which students had to take positions on how to solve a problem.

“It made me really understand the process,” says Ajmal. “You have to explain what you think and defend your answer.” 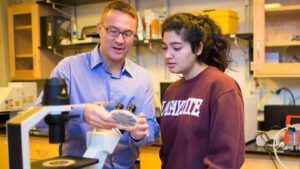 In class, the 16 students designed and created a microfluidic chip, which is used to process, move, mix or separate liquids at the micro level. Smaller groups of three students each produced podcasts on different topics in chemical engineering and nanotechnology.

“The homework and exams didn’t feel like a burden, but were like an exciting game that I wanted to solve and learn,” says Ajmal.

It was exactly the kind of experience she was looking for in a liberal arts education.

“I’ve really benefited from the small classes, the discussions, the ability to do research with actual professors,” she says. “At a large university, all you have is contact with TA’s [teaching assistants]. At Lafayette, you can ask professors questions during class and stay after class if you have more questions.”

Ajmal first considered applying to Lafayette when she was thumbing through her high school yearbook and read a profile of a classmate who had received significant financial aid. She applied and received a scholarship endowed by William R. Dodds Jr. ’74.

“This scholarship has meant a lot,” she says. “I couldn’t afford to study at a prestigious college without it.”

It’s given her exceptional opportunities like participating in Technology Clinic, a two-semester course in which a student team tackles a real-world problem for a client using a variety of disciplinary perspectives. Ajmal joined students majoring in economics, biology, French, international affairs, and government & law to find ways to engage the Lafayette community with the Maker movement, which encourages people to design and create physical objects. Along the way, she created a handmade cheese press.

This past summer Ajmal conducted laboratory research with Polly Piergiovanni, professor of chemical engineering. They studied the adsorption by wool of a red dye created by the cochineal insect using different “mordants,” metal ions that help the dye stick to the wool. She will present her work at the American Institute of Chemical Engineers Annual Meeting in San Francisco in November. She plans to join another lab next summer and eventually to pursue a graduate degree in engineering.

For now, she is enthusiastic about encouraging others, particularly women and minorities, to pursue science and engineering. As president of the student group Minority Scientists and Engineers, Ajmal says women and minorities should not be intimidated when confronting difficult material.

“You have to keep on pursuing that field and not lose confidence,” she says. “Other students may be better prepared and have a better background, but do not compare yourself to them. Keep on pushing.”