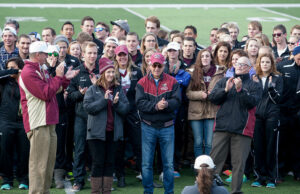 With the swimming and diving teams looking on during Homecoming 2015, President Alison Byerly thanks Mike Weinstein ’70 for his gift to fund the renovation of the College’s natatorium.

Lafayette will dedicate the newly renovated Weinstein Natatorium in a ceremony at 12:30 p.m. Saturday, Oct. 1, during Homecoming Weekend.

The event will be held in the natatorium, which reopened in August after undergoing a dramatic transformation thanks to a multi-million-dollar gift from Mike Weinstein ’70 and his wife, Jill Weinstein.

Their contribution was the lead gift for an extensive renovation featuring the addition of striking exterior windows and significant upgrades to spectator seating and pool lighting. Major improvements also include new one-meter and three-meter diving towers, a new scoreboard, new mechanical systems, a new pool tank finish, and an upgraded race timing system. 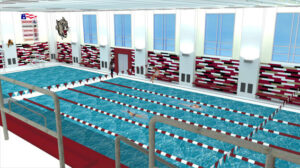 The home of Lafayette’s NCAA Division I men’s and women’s swimming and diving teams, the natatorium also serves the College community as a popular venue for intramural and club sports and recreational use. The renovation project totaled $5.6 million. The engineering consulting firm of Clough, Harbour and Associates was the designer and project manager.

“We are immensely grateful to Mike and Jill Weinstein for their leadership support of the natatorium project and for all of their generous and meaningful support of Lafayette over many years,” Lafayette President Alison Byerly said.

“My Lafayette education played a formative role in my life, helping guide me to success in the business world. Working through the academic demands and competing in athletics at the highest level provided life-changing experiences that helped shape who I am today,” Mike Weinstein said. “I hope this gift will give current and future student-athletes a facility that mirrors the quality of education and experience that Lafayette student-athletes deserve.”

The Weinsteins’ contribution supports Lafayette’s Live Connected, Lead Change campaign, which has raised more than $315 million toward its goal of $400 million to build on and connect the College’s strengths, solidify its standing among the nation’s most outstanding undergraduate institutions, and position it for future success. Support for athletics contributes to the campaign’s goal of creating a more connected campus community.

The Weinsteins had previously established a million-dollar scholarship fund to benefit members of the varsity swimming and diving teams. In 2011, they were inducted into the College’s Société d’Honneur, which recognizes exceptional lifetime generosity on the part of alumni, parents, and friends.

An economics major at Lafayette, Mike Weinstein served as captain of the swim team and water polo team. He graduated with honors, was a member of Phi Beta Kappa, and earned an MBA from Harvard Business School in 1972.

Weinstein is chairman of INOV8 Beverage Consulting Group, which provides advisory services to multiple U.S. and international beverage companies. He is best known for leading the remarkable turnaround of the Snapple brand. He became CEO of Snapple in 1997 when Triarc Companies purchased it from Quaker Oats for $300 million, brought a new vision to the organization, and, within three years, orchestrated its sale to Cadbury Schweppes for $1.45 billion. Weinstein was recognized as the Beverage Industry Executive of the Year in 1999, was elected to the Beverage World Hall of Fame in 2000, and received the Visionary Award from Beverage Digest in 2004. In recognition of his professional achievements, Lafayette presented him its George Washington Kidd, Class of 1836, Award in 2007.

The natatorium was constructed in 1973 and named for John Ruef, Class of 1901, and his brother, Harry Ruef, Class of 1905, in recognition of a generous unrestricted bequest from John Ruef. A plaque in the renovated facility honors the Ruef family’s legacy.