When Anna Ptasinski ’18 (Denver, Col.) studied cancer cells in mice this summer, she didn’t just sharpen the focus of the microscope to observe the cells—she also expanded her perspective on the possibilities for her future.

“I’ve always known that I want to go into medicine,” says Ptasinski, a biology major who worked on the EXCEL Scholars project with Bob Kurt, Kreider Professor and head of biology. “I wanted to be an orthopedic surgeon, and I didn’t consider doing research because, in my head, that meant being by myself in a lab all day. That’s not something I’d be interested in.”

However, what she discovered was an exciting and critical part of the medical field in a dynamic setting, where she worked with and received support from professors and other students in the Biology Department. 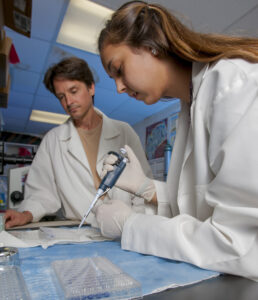 “Conducting this research was an amazing experience,” Ptasinski says. “We all became so close. It opened my eyes to so many interesting parts of medicine—and science, in general—that I didn’t consider before. I still want to go on to medical school, but now I have to think about what I want to do because there are so many great options.”

For the project, the researchers implanted sponges that were injected with cancer cells or saline in mice. The sponges were removed at different times to analyze the infiltrating white blood cells.

“Since the innate immune system plays a crucial role in the response against cancer,” Kurt explains, “studying the types of white blood cells involved in anti-tumor immunity over time may provide important information to better understand cancer progression.”

In the final analysis, he says, no significant differences between the sponges containing tumor cells or saline were observed between 24 and 72 hours. Their data suggested that a limited immune response exists during the early stages of cancer progression. Experiments to gain a deeper understanding of this will continue. 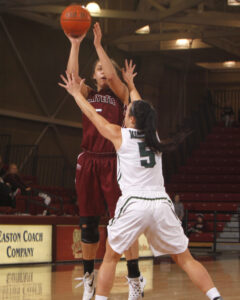 Anna Ptasinski ’18 shoots during a game against Loyola (Md.).

“It is valuable to know how autoimmune diseases, cancer, and other diseases start and progress,” adds Ptasinski. “Maybe one day, this research will help shape the treatments of these diseases.”

“I would like to thank Steven and Ann Yanez for supporting our project,” Ptasinski says. “This experience has inspired me and helped shape my own goals. On a larger scale, I think that our research can be influential in the lives of so many people worldwide.”

In addition to her academic work, Ptasinski is a shooting guard on the women’s basketball team, a peer mentor, a drug and alcohol peer adviser, and a member of the Athletes C.A.R.E programs committee. She attended Lafayette’s Oaks Leadership Academy, funded through gifts given by Cynthia Oaks Linville ’80 and Judson Linville ’79 in honor of Cynthia’s father, the late Dr. Wilbur Oaks ’51. Ptasinski was the sole representative for Lafayette and the Patriot League at the annual NCAA Student-Athlete Leadership Forum held in April in Phoenix, Ariz. Her brother, Joey Ptasinski ’15, played on the men’s basketball team.