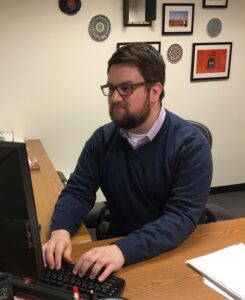 Jeffrey Zimmer ’10 was feeling both excited and overwhelmed about the possibilities as he sought a summer internship.

A sophomore international affairs major, he had known for a long time that he wanted experience related to his major in the nation’s capital. But should he shoot for a nonprofit, a government agency, or even policy or academia? He had no idea.

“Was I making the wrong choice by looking at government internships when my skills were better aligned elsewhere? I also felt worried about whether I was a competitive candidate in D.C.,” recalls Zimmer, who also majored in French.

What seemed like the perfect fit caught his eye – an opportunity with the American Center for International Labor Solidarity. A Politics of Africa class with Professor John McCartney had piqued his interest in grassroots movements and the varied political histories of the continent. Zimmer would be working with the Africa Department and assisting the organization’s expert on migration and human trafficking.

Zimmer secured the internship, but there was the issue of cost. Coming from a working-class family, he needed to earn money in the summer for books and other school-related expenses. He had an uncle in Northern Virginia who was happy to host him that summer, but transportation would be an issue.

Raising $10 million for a Student Research and Internships Fund is one of the goals of Lafayette’s Live Connected, Lead Change campaign.

“The stipend from Lafayette was immensely important, and I wouldn’t have been able to take the internship without it,” says Zimmer. “I was able to pay for six weeks of transportation expenses and not be financially hurt from taking an internship instead of working over the summer.”

The experience worked out perfectly, he recalls. Zimmer tackled issues related to community organizing in Nigeria, Liberia, and Zimbabwe, which helped him draw links among different parts of Africa and their approaches to human rights and community development. In the following years, he stayed in touch with Nalishha Mehta ’98 and other employees, who gave advice on how to handle his job search and what graduate school programs would be a good fit.

Now known simply as The Solidarity Center, the organization hired Zimmer directly after graduation. He continued working there as he earned a master’s in international affairs at American University. 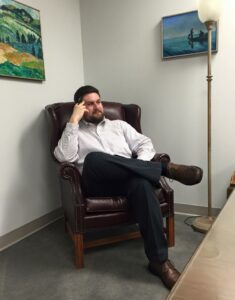 “I’ve stayed with the organization and within my field of worker rights-based development for nearly six years,” says Zimmer, senior technical expert for the Middle East and North Africa, with a focus on labor migration and labor traffic. “The internship truly helped me discover my passion.”

He enjoyed a joyful moment last year when the National Dialogue Quartet of Tunisia won the Nobel Peace Prize. The driving member of the quartet, the national labor union federation (UGTT), had been a partner of the Solidarity Center for a number of years. From 2012-15, Zimmer was responsible for implementing the center’s programs in Tunisia.

“I had long felt an attachment to Tunisia due to spending a summer there in 2005 through a U.S. State Department exchange program…I remember feeling so grateful that I would be working on a country that was close to my heart during a very pivotal time – right after the Arab Spring, which started in Tunisia,” he says.

In partnership with the UGTT, the Solidarity Center helped with programs on women’s issues, youth engagement in the democratic process, and how to help build participatory democracy.

“It was a tough, uphill slog for the federation, but through their leadership, Tunisia is the sole Arab Spring country to have made it,” says Zimmer. “They have a national constitution that’s considered the most progressive in the Arab world. They are dealing with stiff economic challenges, but also are not falling into traps of authoritarianism or hopelessness. Despite all the obstacles and turmoil, Tunisia is working hard to make it as a democracy.”