Richard Paynton Jr. ’86, president, CEO, and CTO of Dontech Inc., explains his motivation for enhancing the scholarship fund for engineering majors that his mother established in memory of his father, Richard Paynton Sr. ’52.

Lafayette has been an important part of the Paynton family for approximately 70 years. In addition to my father and me, I have uncles, cousins, a brother-in-law and his family, as well as a nephew as part of the Lafayette tradition.  Even my mother adopted Lafayette and served for several years on its women’s leadership board. 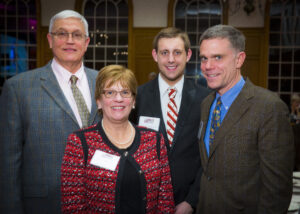 My father believed very strongly in education and especially in the sciences and technology.  He conveyed to me in 1982 when I was selecting a major at Lafayette that there was a shortage of engineers in the United States.  This helped influence me to become an electrical engineer.  My Lafayette education helped me continue and grow the family business my dad started in 1971. Today we design and build optics for military displays (e.g., aircraft cockpits) and optical systems (e.g., targeting systems) and optics for high-end medical and industrial displays.

My father gained lifelong friendships with students and professors during his time at Lafayette.  He found Lafayette to be a unique community, possessing a rare combination of academic excellence with a close, family-like community environment.  He remained active with the school for the remainder of his life.  My experiences at Lafayette were very similar to my dad’s, albeit some 30 years later.  Hopefully, I can keep the tradition going with future generations.

Attending Lafayette College is a significant financial investment.  My dad had the benefit of going though Lafayette on the GI plan, as he was a veteran who had served in the Pacific Theater during WWII.  My father realized that without financial support, Lafayette would have been outside his reach.

Having a scholarship in my dad’s name accomplishes a few things:  It makes Lafayette accessible to people like my father, who needed financial assistance in order to get a good education, it encourages students from the United States to get a technical education, and it keeps my father alive in some manner with the school he loved so much.