Ever since volunteering in Belarus for 10 days before her senior year in high school, Hannah Smock Estifanos ’10 was looking for a way to return to the country that had captured her heart. The experience inspired her to study Russian throughout her time at Lafayette and to double major in international affairs and Russian & East European studies.

“I wanted to return and be able to speak Russian with everyone I met, and come to a greater understanding of Belarus, its history, its people, and its culture in the process,” she says. “As my Lafayette experience was drawing to a close, I also knew that an international affairs/Russian and East European studies degree would be incomplete without firsthand experience studying or interning in Eastern Europe.” 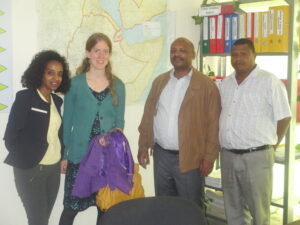 In addition to hands-on learning, students seek a summer internship for the workplace experience, networking opportunities, and possible post-graduation employment that they provide. But many of these internships are low-paid or unpaid jobs. Coming from a single-income family with two younger siblings still living at home, Estifanos was among those who don’t have the means to take advantage of such an opportunity.

Lafayette meets the need for some students through internship stipends funded by donations from alumni, parents, and friends of the College in the form of endowments and annual giving. In addition, the senior class gift has been dedicated to internship stipends since 2006.  (This year the class gift went toward the Brian Keller ’16 Scholarship Fund, but the class’ 93 percent participation in giving triggered a $20,000 trustee challenge grant for stipends.)

Raising $10 million for a Student Research and Internships Fund is one of the initiatives of Lafayette’s Live Connected, Lead Change campaign.

“Summer internships are a game changer for students,” says Pat Winkler Schor ’82, co-chair of the Marquis Parents Council. “More and more employers insist that new college graduates have relevant professional experience on their resumes. But gaining that crucial experience is especially difficult for some students, because it’s not financially feasible for them to serve an unpaid or low-paying summer internship.”

Hannah Smock Estifanos ’10 meets with her Belarusian host parents, Dr. Mikhail and Ludmila Sobol, at their home in June 2009.

A stipend through the 2009 senior class gift enabled Estifanos to intern with CitiHope International and its partner in Minsk, Nadezhda Express, during the summer before her senior year. She accompanied staff to hospitals where medicines had been delivered and interviewed physicians and patients. She also interviewed current and former partners and volunteers of CitiHope/Nadezhda Express in Belarus to help chronicle the story of two decades of humanitarian partnership since the fall of the Soviet Union. In addition, she volunteered at several of the local institutions that Nadezhda Express supported, including a children’s hospice; a home for children under the age of 5, most of whom had been abandoned by their parents and almost all of whom had physical or developmental disabilities; and a shelter for children temporarily removed from abusive homes.

“Speaking Russian all day, every day in a fully immersive experience was the best thing that ever happened to my Russian language skills,” says Estifanos. “Traveling alone, living with a host family, and being able to experience day-to-day life and work in Belarus – without a translator/interpreter – rather than traveling as part of a group of foreign tourists or volunteers allowed me to experience and understand the world and my own limitations in ways I’d never been able to before.”

Overall, 50 students received internship stipends this summer, with a total of $93,500 awarded. A few examples of students with their employers and stipend donors:

Three new funds have been created in the last year:

This summer, alumni and parents at eight workplaces are hosting student interns through a new Lafayette program, InternShift. Employer partners provide students with mentoring from senior executives, complex projects to tackle, and professional development that includes interaction with internal and external constituents. Students receive competitive income from the employer or through a Lafayette stipend.

The return on investment for supporting student internships is evident in the stories of alumni who credit these summer experiences with helping them launch their careers. Estifanos, for example, began working for CitiHope International in Washington, D.C., not long after graduating. Six years later, she’s in her fourth position with the organization, serving on the key staff team as director of food and nutrition programs.

“The 2009 summer internship directly helped me get to where I am today,” she says.