Lenny sits with the back of his wheelchair against the wall, away from the tables of other nursing home residents, out of range of the television. A nurse on his floor explains that he’s an agreeable person, but she isn’t sure he’ll want to meet a new visitor today.

When asked, though, Lenny nods his head. Kofi Boateng ’16 makes his way over and introduces himself.

“I just lost my wife,” says Lenny. “She passed away last Thursday. What are you gonna do?”

He adds that he and his wife were married for 34 years, the last four spent together at the facility, Gracedale Nursing Home in Nazareth, Pa. 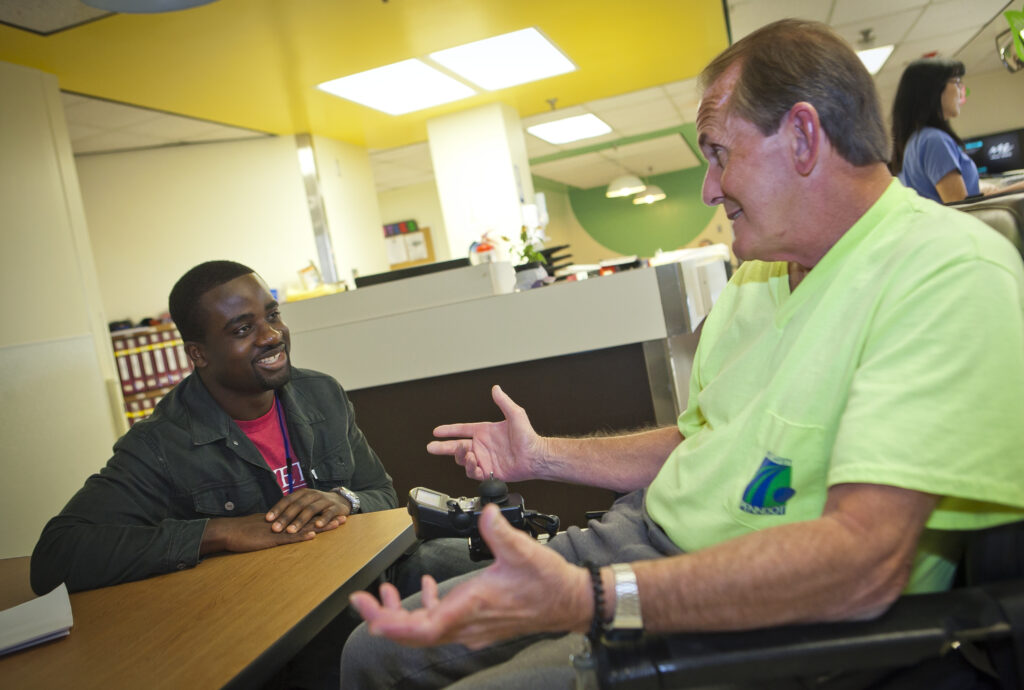 For the next 40 minutes, Boateng asks Lenny questions about his life. He learns that he enjoys reading, avoids sleeping during the day, and doesn’t like to stay in his room. Lenny talks about his sister, Eleanor, who’s 82 and works four hours a day as a store greeter, and his two sons, who were in the Army. He reminisces about enlisting in the Navy at age 18 and serving on the U.S. Shenandoah in the Mediterranean and Caribbean. (“I had fun, I’ll tell you.”) He recalls jobs at a shoe factory, lamp factory, Howard Johnson’s restaurant, and Giant grocery store. He says that he’s expecting monthly payments from the Navy to start soon and boost his meager spending money.

The conversation is the beginning of a relationship between two men more than 60 years apart in age. It’s one of many friendships that Boateng has developed this semester at the nursing home, where he’s come three days a week for about three hours at a time.

The visits are a service-learning project for the capstone course of his minor in aging studies. As Boateng provides companionship for senior citizens, he’s seeking a better understanding of the challenges faced by both residents and caregivers in nursing homes. He’ll write a paper about his observations with recommendations for improving the quality of care.

The learning experience wouldn’t be possible without Lafayette’s Preminger Gerontology Scholar Program, which covers transportation and some supplies, such as a Frisbee that Boateng recently gave to a Gracedale resident. Established by Lynne and Marc Preminger ’71, the fund supports a variety of initiatives, from service learning to research projects to visiting speakers. The couple hopes that Preminger Scholars will increase the understanding of unhappiness among the aged and develop new approaches to making life more enjoyable for them through technology, collaborative support, and other approaches. An economics and business graduate, Marc Preminger is the former chief financial officer and senior vice president at CIGNA Health Corp.

Boateng’s introduction to gerontology – the study of aging and older adults – came in his sophomore year from the course Introduction to Aging Studies, taught by Jamila Bookwala, who leads the Aging Studies Program and the Psychology Department. He began volunteering at Gracedale for the class, and after its conclusion, he decided to take on the newly approved aging studies minor. 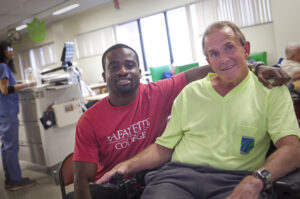 His next service-learning experience, through the biology course Aging and Age-Related Diseases, took place at the Third Street Alliance for Women and Children in downtown Easton. He again interacted with older adults for the capstone course of his self-designed major in global health studies, in which a multidisciplinary team worked on creating a wearable device to assist in fall prevention.

Before beginning his education in gerontology, Boateng admits, he had little interest in the field.

“I thought that growing old was an agonizing process that led to eventual helplessness and dependency, as well as susceptibility to diseases that would not allow me to enjoy life,” he says. “Basically, I feared the inevitability.”

He’s discovered that nursing homes are much more dynamic than people care to understand. 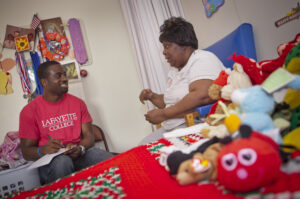 “There seems to be this misconception that it is a depressing place to be, probably because of the thought that it is a place where older adults go to spend their limited years and pass on,” he says. “What I have learned is that it is a community. A community of engaged, active, motivated, inspiring, silly, tenacious older adults. There are people who are bed-bound, but there are equal numbers of older adults who are engaged in volunteering and doing activities that support one another. Just talking to a resident and finding out about their life is like taking a journey into a new world…sort of the same feeling you get when you read a really thrilling book.”

Volunteering has revealed that older adults are “normal human beings,” says Boateng, who enjoys the colorful community that is Gracedale. There’s Julia with her hamper full of yarn, which she crochets into gifts. Olga, who’s struggling with boredom and gossip. Daniel, the retired NYPD police officer, whose wife visits him often. Pauline, a sweet woman who lost her husband last year. Faye and Frederick, a couple in their 70s who live on different floors by choice, and Charlie and Judy, who attend activities and meals together, trying maintain their relationship. Bev, who has cognitive disabilities that keep her confined to the unit, leaving her a bit stir crazy. Irene, blessed with a sister who volunteers at Gracedale a few days a week and a husband who comes every day. And many more.

The visits have also brought into sharper focus some issues in the field of gerontology, which incorporates contributions from disciplines such as psychology, biology, neuroscience, economics, sociology, and medicine. For example, those with little experience interacting with older adults often use “elderspeak” — less complex sentences and simpler vocabulary, Boateng explains, similar to how an infant would be addressed.

“This form of communication assumes the older adult is incompetent, reinforces negative age stereotypes, and can decrease the self-esteem of older adults, who then can become withdrawn,” he says. “Having learned this, I became more cognizant about my communication style to make sure I wasn’t stereotyping older adults. I realized that it would take leaving behind any biases and respecting the fact that these are adults with vast life experiences. They should be treated with the same dignity and reverence that I would want for myself.”

What’s developed in place of “elderspeak” is a personable way of communicating with the residents by asking them about their lives and engaging in thought-provoking discussions. It enables Boateng to build closer relationships.

When he met Jeff, for example, they talked so long it left him feeling as if they’d known each other for years. As they discussed their tastes in music, Boateng was shocked to learn that Jeff listens to modern day hip hop. They talked about cooking, and after Boateng recounted a recent self-taught pizza-making experience, Jeff explained how to make and can his own pizza sauce.

“There is always something to talk about, something to joke about, or even something to do,” says Boateng. “I can connect with [some] residents on a level that’s not possible with some of my peers. They share so much wisdom and have had countless inspirational life stories that make me motivated to seek out similar experiences.” 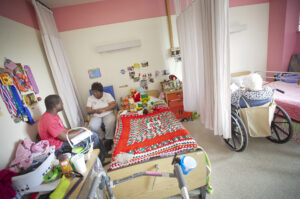 He was recently talking to a resident about how she ended up in a nursing home, and she explained that although it initially upset and worried her daughter, she gave up independent living so her daughter wouldn’t have to worry about her safety and providing assistance.

“It made me think about the close relationship I have with my mother and had me wondering whether I would accept her decision to move into nursing home care. Children are supposed to take care of their parents in my culture,” says Boateng, who spent his early childhood in Ghana. “Hearing about her daughter’s frustration resonated with my deepest fear – feeling disappointed because I wouldn’t be able to take care of my mother in her old age.”

After graduating, he will teach chemistry and physics in Guinea as a Peace Corps volunteer for two years before applying to medical school. Even if he doesn’t wind up specializing in gerontology, Boateng sees great benefit in what he’s learning at Gracedale.

“As a future physician, I think it’s critical to understand people different from myself, with different life experiences, and to develop an appreciation for their uniqueness because it will make giving care more personable,” he says. “And I now understand the meaningful impact that having and showing compassion can have, especially on older adults. Care isn’t just about treating a physical ailment. Making someone feel happy, like they are being heard, and like they matter, is essential to providing quality care. This is something we’ve lost touch with as a consumer society; we’ve lost touch with the intangible meanings of things and the impacts those meanings can have. I have a lot more to learn about improving the quality of care for my future patients, but I think I’m making great progress.”