Members of the Classes of 2000 to 2015 have special incentives to make a gift to Lafayette before the annual giving fiscal year ends on June 30. The class with the most new donors – those who give for the first time since July 1, 2015 – between May 23 and June 30 will enjoy bragging rights, a scholarship named in its honor, and a special class get-together on campus, free of charge. A website for this campaign includes a class leaderboard, a donor list, and more information. 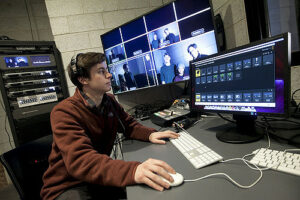 State-of-the-art technology is one of the educational priorities supported by the Annual Fund.

It’s important for all alumni to know that when it comes to the dollars that enable the College to fulfill its mission, the Annual Fund is a pivotal source. That’s why one of the goals of the $400 million Live Connected, Lead Change campaign is to raise $75 million for the Annual Fund. Alumni, parents, and friends have contributed more than $57 million toward this goal so far.

“It’s also important to know that alumni participation—the percentage of graduates who make a financial contribution to their alma mater—factors into college rankings and influences how people view the quality and value of a Lafayette education,” says Megan Tavani Morici ’06, director of the Annual Fund. “And every gift, no matter the size, makes an impact.”

Gifts to the Annual Fund are used in full during the fiscal year in which they are received, so they have an immediate impact on the College’s capacity to provide a wealth of opportunities to students. 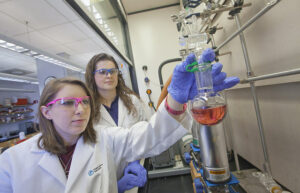 Gifts may be directed to support a wide variety of programs and initiatives. When gifts are made without restrictions on their use, they give the College the flexibility to allocate resources strategically, taking advantage of unexpected opportunities to strengthen existing programs and fund new ones.

“Many donors are passionate about supporting a specific area of the College for which they have a special affinity, which is wonderful,” says Morici. “And to help Lafayette meet pressing needs and build on its strengths in a range of areas, there is no better way than supporting the Annual Fund with an unrestricted gift.”

Other special initiatives have enhanced annual giving this year, including the inaugural GiveLafayette Challenge March 8-10, when 570 donors contributed $103,313 within 48 hours in celebration of the anniversary of the College’s founding.

A total of 532 members of the 181st graduating class — nearly 94 percent — have made gifts to the Senior Class Fund drive, chaired by Michael Bloom, Tricia Reilly, and Abbey Stefanides. Their contributions, totaling $16,227.74, are supporting a scholarship fund honoring the memory of their classmate Brian Keller ’16, who died last June after suffering injuries in a car accident.

“The scholarship fund will honor Brian Keller forever and benefit future students through the years,” Morici says.  A trustee match, which was contingent on participation by at least 93 percent of the class, is providing $20,000 for summer internship stipends.

“Every member of the Class of 2016 has benefited in many ways from the generosity of graduates in all the previous classes,” she adds. “Now the class is taking its own place in Lafayette’s tradition of giving as its members take their place in our powerful network of dedicated alumni.” 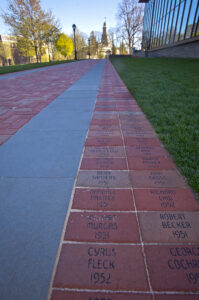 Bricks for members of the Fleck Consistent Giving Society

The Fleck Consistent Giving Society honors alumni, parents, and friends who recognize the value of consistent support for the College by giving for five or more consecutive years. Those who reach the 10-year mark in consistent giving receive a decorative brick, engraved with their name and class year, which is displayed on the Quad.

Young alumni have an exciting new opportunity. Members of the 10 most recent graduating classes are inducted into the Fleck Society after three years of consistent giving, and those who reach the five-year mark receive an engraved brick on the Quad.

Named in honor of Cyrus S. Fleck Sr. ’20, a longtime member of the Board of Trustees who was the inaugural recipient of the Lafayette Medal for Distinguished Service, the society has grown to include more than 6,700 members since its founding in 2005.