With a Little Help from Their Alumni Mentors

When Jacob Strock ’17 set foot on the docks of Wachapreague, Va., for his internship with the Virginia Institute of Marine Science (VIMS), he didn’t want to be a passive observer – he wanted to accomplish something. 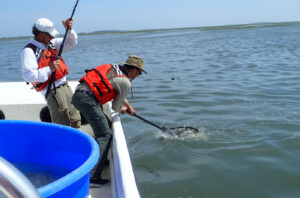 Richard Brill ’70 and Jacob Strock ’17 work together to catch a fish.

With the help of the Beane Intern Scholars program, Strock (Millington, N.J.) did just that. Not only did the program provide the financial support that enabled him to live near the VIMS Eastern Shore Lab, it connected him with an alumni career mentor who shared her own experiences and insights into the world of biological research.

The Beane program, which is run by the Office of Career Services, supports up to six students annually with a $4,000 stipend for summer internship expenses and provides each with an alumni career mentor outside of the internship. George Whelan P’05 gave a generous gift to start the program in 2010, and Robert Beane ’58, a former trustee, has since provided ongoing support.

Career services counselors work closely with the Beane Scholars to match them with internships and mentors that provide valuable insight into each student’s field of interest. The career mentor is a unique feature of the program, one that Career Services hopes will be part of more internship programs in the future. 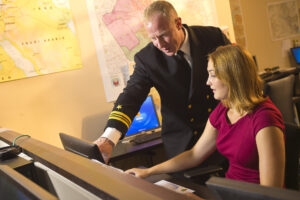 Jenna Gowell ’16 and Christopher Shain ’95 at the Institute for the Study of War in Washington, D.C.

“Mr. Beane clearly understood and recognized the power behind storytelling and professional support that can launch a young person’s career,” says Erin Evans, associate director of career services. “National research continues to demonstrate that access to internships are game-changers for students. One day, we’d love for all of our stipend recipients to receive an alumni mentor.”

Jenna Gowell ’16 (Amherst, N.H.) is a perfect example. Her mentor, Lieutenant Commander Christopher Shain ’95, deputy chief of staff at the Capabilities Management Office, was pivotal in helping her plan her next move after Lafayette.

A double major in international affairs and psychology, Gowell developed a passion for counterterrorism after researching the Middle East and spending a summer in Jordan for an intensive Arabic language program. She interned at the Institute for the Study of War (ISW), a think tank in Washington, D.C. 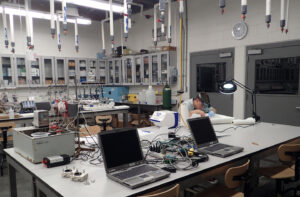 Jacob Strock ’17 works late into the night at the Virginia Institute of Marine Science.

Competition is tough for coveted counterterrorism jobs; most applicants are multilingual with near perfect GPAs and multiple internships. Shain advised her to be tenacious in her goals and trust her instincts. He also inspired her to enter the Navy as an intelligence officer after completing a master’s degree in international relations and politics at Cambridge University next year.

“He has been wholly dedicated to helping me find my niche in the community and has helped me see my own potential value to the field,” she says. “Having the confidence of someone so successful means the world.”

Janet Duffy-Anderson ’90, supervisory research fisheries biologist at the National Oceanic & Atmospheric Administration/Alaska Fisheries Science Center in Seattle, has helped Strock map out graduate options to achieve his goal of completing a Ph.D. in fish biology. Strock’s internship host, Richard Brill ’70, fishery biologist and adjunct faculty at VIMS, also enthusiastically shared his own experiences on College Hill as well as what he learned while pursuing his research career.

“It’s great to have mentors who are in a place you want to see yourself work toward,” says Strock, an environmental science major.

Strock and Gowell agree that without the Beane stipends, living expenses alone would’ve made their internships nearly impossible. 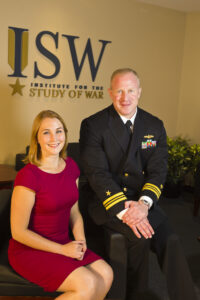 Living on location near the Eastern Shore Lab allowed Strock to commit to his research project from start to finish. He studied the vascular effects of different gasotransmitters in a subclass of fish that includes shark and skate. He was involved in all aspects of the project, from collecting specimens in the field to dissection to data analysis.

After conducting research in a smaller, intimate lab environment, Strock knows that research is the right path.

Gowell lived in Washington, D.C., while gaining an inside look at counterterrorism intelligence at ISW. As part of an intern group dubbed the “ISIS team,” Gowell monitored ISIS activity around the world and composed daily briefings on the most significant ISIS stories for ISW’s leadership team. She also helped write the Commander’s Critical Information Requirement, a digest on ISIS activity, given daily to a classified audience.

When a massive ISIS attack in Sinai, Egypt, occurred while Gowell’s supervisor was out of the office, she and her fellow interns wrote an article that was published on ISW’s website and picked up by Business Insider within 24 hours.

Others involved in the program included: