When Larry Murphy ’58 was a student, he took a job in the career placement office not only to earn money, but to learn the process of interviewing with employers and landing a good job.
The exposure paid off, as Murphy started a successful banking career that included executive positions at Citibank, Bankers Trust New York, and Japan’s Sanwa/UFJ Bank.

At Bankers Trust, the government and law graduate was at the forefront of hiring young employees. He was interested in bringing in Lafayette students, but found they lacked the right approach to finding a job.

“Most students didn’t have resumes until late in their senior year,” he recalls, adding that students typically scheduled interviews with the firm after spots in the next year’s employee training class had already been filled.

“When we got Lafayette kids, they were really good,” says Murphy. “They just didn’t know how to get a job; they always came too late. ‘We’ll take the summer off and look for a job afterward.’ That wasn’t the real world.” 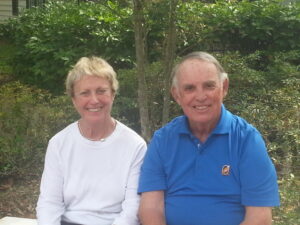 He saw this compounded by a trend starting in the late ’70s of fewer traditional companies visiting campus to recruit students. He discussed with trustee Bob Yohe ’58 the need to revamp the College’s career services. When Yohe shared their ideas with the Board of Trustees, it helped pave the way for what eventually became Gateway, Lafayette’s four-year career preparation program. The good friends went on to serve on Lafayette’s Ad Hoc Committee for Career Planning and Placement.

During his career, Murphy hosted Lafayette student interns and hired several young grads as employees. He also gave back to the College through volunteering as an Alumni Admissions Representative for nearly two decades and by supporting the Annual Fund with consistent giving and in his will.

Retirement didn’t dampen Murphy’s enthusiasm for helping students start their careers. After making two gifts toward internship stipends, he and his wife recently began a five-year commitment to fund the C. Lawrence ’58 and Carol S. Murphy P’92 Internship Endowment, which will enable students to take an unpaid or low-paying summer position related to their career interests. They solidified the endowment by adding a stipulation in their will to continue funding it if Larry dies before the pledge is fulfilled.

“My parents were not very wealthy,” says Murphy, whose legacies include son Mark Murphy ’92 and niece Alison Murphy Andrus ’95. “I had scholarships at Lafayette and a lot of jobs at the school. I never would have been able to take time in the summer to go intern somewhere. If a kid takes this opportunity and the internship is structured correctly, it can give a great idea of what the first several years in a job would be like.”

The College recognizes planned-giving donors with membership in the James Madison Porter Society. To learn more, visit http://lafayette.giftlegacy.com or contact Joe Samaritano ’91 at samaritj@lafayette.edu or 610-330-5047.