The generous support of more than 23,000 alumni, parents, and friends is propelling the most ambitious fundraising effort in Lafayette’s history toward its goal of $400 million to build on and connect the College’s strengths, solidify its standing among the nation’s most outstanding undergraduate institutions, and position it for future success.

Gifts, pledges, and bequests totaled more than $299 million as of March 31. Contributions include a gift of more than $28.5 million from Kent Rockwell ’66 to support initiatives in science, technology, and innovation. There have been 58 gifts or pledges of $1 million or more. A dozen of these exceed $5 million, and four exceed $10 million. 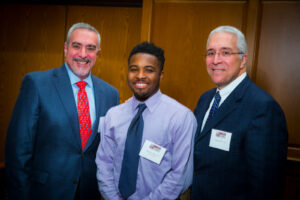 More than $35 million has been contributed in the current fiscal year (July 1, 2015, through June 30, 2016) and more than $63 million since the College celebrated the campaign’s public launch in November 2014. Bequest expectancies and planned gifts are playing a significant role in the campaign’s progress. The total of bequest expectancies and planned gifts is exceeds $94.5 million, more than 30 percent of the total raised to date.

The campaign is enabling the College to enhance and improve every aspect of the Lafayette experience. Reflecting the Lafayette’s distinctive strengths, it has three main areas of emphasis, or pillars: Connecting Liberal Arts and Engineering, Fostering Innovation in Teaching and Learning, and Connecting the Campus Community.

The campaign has added more than $41 million to the College’s resources for financial aid as part of a multi-dimensional effort to create a more connected campus community.

“Nothing is more important to the College’s future than strengthening financial aid,” says President Alison Byerly. That is the primary objective of a new strategic direction for Lafayette that Byerly announced in February. The new direction is centered on making substantial new investments in Lafayette’s people as the best way to ensure the College’s future success. This includes strengthening financial aid resources with the goal of becoming a college that is able to admit the most qualified students regardless of their ability to pay.

“When we reach our goal, we will join the ranks of the nation’s finest colleges as a place where all students are admitted solely on the basis of their own merit,” Byerly says. “Lafayette will be known not only for its distinctive, integrated liberal arts and engineering education but also for making that education available to all, regardless of financial means.”

To help accomplish this, Lafayette will expand enrollment by 350 to 400 students over six to eight years, add 35-40 faculty positions (to maintain or improve its 10:1 student-faculty ratio), and enhance faculty recruitment and retention through competitive salaries.

During the campaign, more than 100 new named scholarships have been established in the permanent endowment or through annual giving. Tony Fernandez ʼ81 and Johnny Gossick ʼ18 were the featured speakers at the College’s 11th Biennial Scholarship Recognition Dinner in February. Fernandez established the A and S Fernandez Family Scholarship Fund. Gossick, the recipient of aid from several named scholarship funds, is a neuroscience major from Forest Hill, Md.

Increasing the number of endowed professorships is another campaign initiative that supports the College’s new strategic direction. The College has more than three dozen endowed faculty positions, some of which date back more than a century, across all four academic divisions of the College.

The professors who hold them are the stewards of a legacy forged over many years by outstanding teacher-scholars with the support of visionary benefactors whose impact on the College has been immense. That support has continued during the Live Connected, Lead Change campaign. To date, gifts to the campaign have endowed 10 new professorships and other key positions.

The expansion of the Williams Arts Campus, where the College connects with downtown Easton, has increased Lafayette’s space for the arts by almost 50 percent and created a spectacular gateway to both the campus and Easton.

In addition to strengthening the College’s academic programs in theater and film & media studies, facilities at the arts campus are enhancing artistic opportunities for all Lafayette students. This supports the campaign pillar of fostering integration within the College’s distinctive combination of traditional liberal arts with programs in engineering.

More than $98 million has been raised to strengthen the humanities, social sciences, natural sciences, and engineering, including faculty positions, facilities, equipment, student research, and more.

More than $79 million has been raised for facilities to enhance excellence in all four academic divisions and enrich students’ residential, co-curricular, and extracurricular experiences.

The campaign has raised more than $57 million for the Annual Fund. An important campaign priority, annual giving is an essential source of flexible funding that is vital to meeting pressing needs.