Ron Garfunkel ’63 is not ashamed to admit that he’s a sentimental, “rah-rah kind of Lafayette guy.”

His college experience was filled with good times spent learning about history, living with his Phi Psi fraternity brothers, and getting things done in student groups like the Interfraternity Council, Fine Arts Society, Melange, and Scabbard & Blade military honor society. 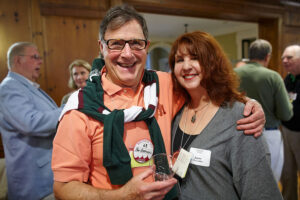 Ron Garfunkel ’63 hangs out with Jayne Wetschler, wife of Stanley Wetschler ’63, during the Class of 1963’s 50th Reunion reception at Kirby House.

His friendships and good memories have brought him back to campus for every five-year class reunion. And he’s served as class reunion chair for more than four decades.

But his real inspiration for supporting the College financially is Lafayette’s progress and where it’s headed.

“I had a great undergraduate experience, and much of my success in life comes from not just my academic education, but my social education as well,” he says. “But it’s more about my time after Lafayette – how the College grew and matured. I’m proud of the school; I think it’s an amazing institution.”

Garfunkel established a scholarship fund in 2001. Excited about the College’s new strategic direction to work toward admitting the most qualified students regardless of their ability to pay, he’s decided to put Lafayette in his will so that the fund will grow to $1 million after his passing. 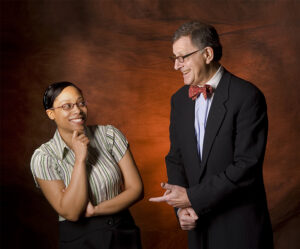 Ron Garfunkel ’63 and Karlyn Adams ’09 at a Scholarship Recognition DInner.

“I understand and support what Lafayette’s trying to do,” he says. “I think it would be phenomenal to go need blind (in admissions). One thing you need for that to happen is to create more scholarships.”

He notes that one of his fraternity brothers was a brilliant student who chose Lafayette over Princeton because of a scholarship.

“He was a very important person to me,” he says. “I appreciated his intellect. You want to go to school with people like that.”

Garfunkel adds that while he gives to Lafayette each year, using his will to boost the scholarship fund is ideal because much of his money is tied up in real estate and other investments.

“This is all about building a legacy and helping people,” he says.

He feels so strongly about this that he has a list of fellow alumni he plans to approach about putting Lafayette in their wills also.

“You’re doing something for humanity, for the good of the world,” Garfunkel says. “That feels good.”

The College recognizes planned-giving donors with membership in the James Madison Porter Society. To learn more, visit http://lafayette.giftlegacy.com or contact Joe Samaritano ’91 at samaritj@lafayette.edu or 610-330-5047.