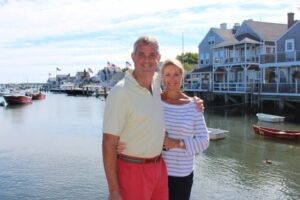 Tracy Hagert Sutka ’82 spent her junior year in Paris at the Sorbonne, her tuition covered by “enormously generous” financial aid. The international affairs major’s timing was great as France was holding its presidential election in 1981. Classes taught in French with native speakers and other international students improved her language skills dramatically.

“I was able to use my French in every job I had in banking,” she says. “When my youngest was in school full time, I taught French in a private school for 10 years.” 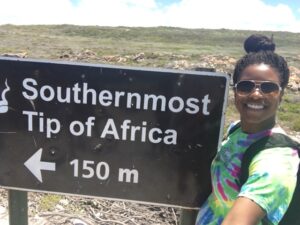 The following January, she met her future husband, Mike Sutka ’83, in front of Lenin’s tomb at the Kremlin during their interim course in the Soviet Union led by professors Rado Pribic and Ellen Hurwitz. Mike wouldn’t have been able to fit an entire semester abroad into his schedule as an economics major, explains Tracy, so the January course was a perfect opportunity for him to gain global exposure.

“At the time, Soviet troops were in Afghanistan and the Soviet Union was a somewhat exotic destination,” she says.  “We were surprised to be treated like celebrities out in public.  People wanted to take our photos holding their children and we all traded very mundane items like a used lipstick or an old pair of jeans for Russian nesting dolls or Soviet Navy shirts.” 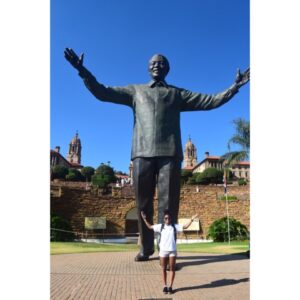 Michaela Tummings ’17 stands next to a statue of President Nelson Mandela near the government’s Union Buildings in Pretoria, South Africa.

It’s no surprise that their son, Christopher Sutka ’17, is studying abroad, spending the spring semester in Prague. The Sutkas have established an endowment at Lafayette to help other students have the same kind of transformational learning experiences they gained through living and learning in another country.

“We support study abroad programs because we don’t want that aspect of college to be out of a student’s reach,” says Tracy.  “With so many majors requiring a global perspective, it would be a shame for a student to miss out on the chance to study abroad because of financial constraints.”

In January, the fund enabled Michaela Tummings ’17 to take the interim course Voices of South Africa, led by Rex Ahene, professor of economics, and Maragarete Lamb-Faffelberger, professor of German and director of Lafayette’s Max Kade Center for German Studies.

“Without the stipend, I would have struggled to find ways to pay for the interim trip and most likely would not have been able to go,” says Tummings. “My life has been greatly impacted for the better, and that probably would not have happened without their generous contribution. I cannot say thank you enough for the great gifts of education and the understanding of culture that they provided me.”

Similar funds, along with the most recent recipients of their support, include: 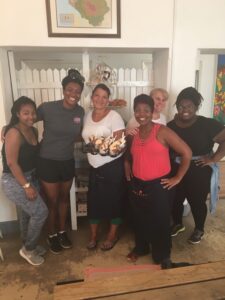 Michaela Tummings ’17 stands with a few friends in the study abroad class along with the owner and staff of the restaurant Tastebud in Stellenbosch.

Financial aid is a key priority of Lafayette’s Live Connected, Lead Change campaign, and President Alison Byerly has announced plans for significant increases to need-based financial aid in the coming years. “We will strengthen financial aid resources to improve access and affordability, with a goal of admitting the most qualified students regardless of their ability to pay,” she said. More than $41 million has been added to the College’s resources for financial aid during the campaign, including over 100 named scholarships established in the permanent endowment or through annual giving.

For Tummings, the South Africa course touched on strong academic interests, including the country’s culture and the remaining economic ramifications of apartheid. A standout moment was a class visit by author and poet Diana Ferrus, who read some of her poetry and talked about the Afrikaans language, its history, and its impact and effect in the black South African community today. 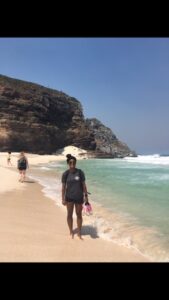 Michaela Tummings ’17 enjoys a secluded beach at the Cape of Good Hope.

“I was really impacted when she challenged the class to reflect on how they had been a part of an injustice each day,” says Tummings. “I had written a paper on whether a reconciliatory attitude in a post-apartheid era was appropriate for the hundreds of thousands of persons harmed by the policies, and Professor Ferrus challenged me to move past reconciliation to considering confrontation, and helped me broaden the scope of my thoughts and apply the same questions that I was asking in class to my life. That was a truly powerful moment for me, and furthermore Professor Ferrus was willing to speak to me after class and take a picture with me. I will never forget that lecture.”

In addition to classroom lectures and assignments, Tummings learned from trips to a number of places in Cape Town and Pretoria. Her favorite excursion was a safari at Kruger National Park, one of the largest game reserves in Africa.

“I plan to revisit South Africa after graduation and when I return to that beautiful country, I will have a greater understanding and appreciation for all of their peoples and for their powerful culture,” she says.